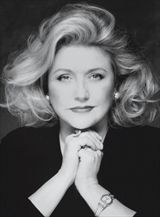 In 1979, she wrote her first novel, A Woman of Substance, and that enduring bestseller was followed by 12 others: Voice of the Heart, Hold the Dream, Act of Will, To Be the Best, The Women in His Life, Remember, Angel, Everything to Gain, Dangerous to Know, Love in Another Town, Her Own Rules and A Secret Affair.

Of these titles, ten have been made into television miniseries or are currently in production. Her novels have sold more than 56 million copies worldwide in more than 88 countries and 38 languages. Barbara Taylor Bradford lives in New York City and Connecticut with her husband, film producer Robert Bradford.