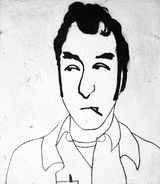 David Flusfeder is the author of six previous novels, including The Gift. He has been a television critic for the London Times, a poker columnist for the Sunday Telegraph, and has contributed features to many other publications, including GQ, Esquire, the Observer, Guardian, New Statesman, and Financial Times. He is the director of creative writing at the University of Kent, and lives in South London with his family.