Old Man on a Bike 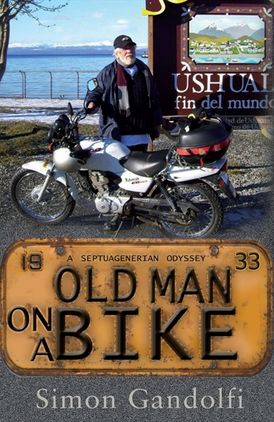 Old Man on a Bike

Simon Gandolfi has never been one to grow old gracefully and following two heart attacks he decides not to rest up, as many might, but to ride the length of Hispanic America on a 125cc motorbike. And why not?

His wife may have plenty of reasons why not, but used to the intrepid septuagenarian's determination to complete any plan he comes up with, she shrugs her shoulders and waves him goodbye.

At 73 years old, Simon Gandolfi sets off from Veracruz on the Gulf of Mexico to embark on a five and a half month journey culminating at 'the end of the world', Ushuaia in Tierra del Fuego. For Simon this is a journey of discovery. Leaving behind the safety and sanctuary of friends and family, he is truly alone but along the way he meets and talks with rich and poor, old and young, officials and professionals, agricultural and industrial workers. This expertly written travelogue reveals not only the stories of those he meets, and his own, but also that of Latin America, its attitudes to itself, to the USA and the UK in the aftermath of the Iraq war and the realities of the poverty and endemic corruption throughout much of this continent.

But whilst guide books often warn of thieves, corrupt police and border officials, Gandolfi writes of the incredible kindness and generosity he encounters, of hope and joy, understanding and new friendships, and ultimately, an old man's refusal to surrender to his years.

'The journey begins tomorrow at 8 a.m with a flight from the UK to Boston. I fly Aer Lingus and have bought and will wear a green shirt and a Clancy Brothers Arran sweater in hope of an upgrade. I will be away from home for many months and I have a long long way to ride. Am I nervous? Yes. Scared? A little.'

Outrageously irresponsible and undeniably liberating, Gandolfi's travels will fire the imaginations of every traveller, young or old.

Simon Gandolfi has travelled widely through the East and the Americas and has lived for periods in a variety of countries and cultures. He is author of 10 books and now lives (when not travelling) in Herefordshire with his wife, Bernadette.

Other Works by Simon Gandolfi