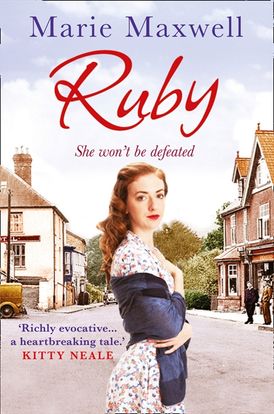 As a former evacuee, feisty Ruby is forced to fend for herself when she returns to her family in London.

Set in the aftermath of WW2, this gripping saga is richly evocative of the period and shows the true grit of our heroine Ruby.

Home is where the heart is…

After having lived peacefully in Cambridgeshire as an evacuee, 15-year-old Ruby Blakeley is bought back to reality when her bully of a brother Ray comes to take her home to East London.

Far from being welcomed back with open arms, Ruby finds herself being treated as a skivvy by her widowed mother and subject to a tirade of taunts from her two brothers.

Things get worse when she becomes pregnant. Unable to tackle her family, Ruby runs away and makes a new start for herself in Southend. But she soon finds she can’t escape her past.

A hard-hitting, gritty drama that will appeal to fans of Katie Flynn and Dilly Court.

Marie Maxwell was born in London and after living here, there and everywhere, now lives happily by the sea in Essex.
She has written seven other books under the name Bernardine Kennedy and information on Marie and Bernardine is available at: www.bernardinekennedy.com

Other Works by Marie Maxwell