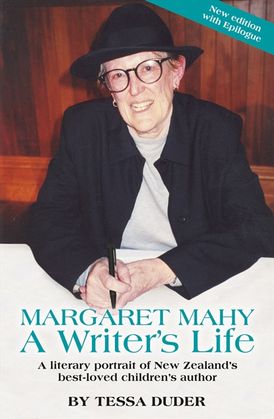 A literary portrait of New Zealand's best-loved children's author Margaret Mahy's death on 23 July 2012 brought forth an unprecedented outpouring of grief and heartfelt tributes from around New Zealand and the world. Her passing at 76 was breaking news in the media, unstoppable through the social networks, noted by political leaders in Parliament and by children in classrooms throughout the country.Margaret was one of the world's leading authors for younger readers for four decades. In her own country she was popularly known as the writer in the multicoloured wig who wrote marvellously funny picture books and enchanted generations of school children. Her story had its fairy-tale elements. In 1968, a hard-pressed solo mother of two daughters, working as a librarian by day and writing long into the night, she was 'discovered' by a leading American publisher who flew 'to the end of the earth' to offer her a multi-book publishing contract.From those first picture books, through the great novels of the 1980s and new books and awards right up to the year of her death, she came to be regarded as the third in New Zealand's literary pantheon, alongside Katherine Mansfield and Janet Frame. In 2006 her achievements were recognised by IBBY (International Board on Books for Young People), awarding her the Hans Christian Andersen Medal, the world's 'Little Nobel', for her distinguished contribution to children's literature.

Tessa Duder trained as a journalist and raised four daughters before publishing her first novel in her late thirties. Some fifty books have followed, for both adult and young readers: novels (notably the best-seller Alex quartet), short story collections, non-fiction, biographies, anthologies and plays. Her writing shows her deep love of the sea – in 2013 she crossed the Tasman Sea under sail on the tall ship Spirit of New Zealand - and a life-long interest in early New Zealand history, particularly of the Auckland region. Her awards have included multiple children's book prizes, the University of Waikato writers' residency, the Katherine Mansfield fellowship to Menton, France, an Artists to Antarctica fellowship, the OBE and an Honorary Doctorate from the University of Waikato. She lives in the sea-girt city of Auckland, New Zealand.

Other Works by Tessa Duder

Is She Still Alive?