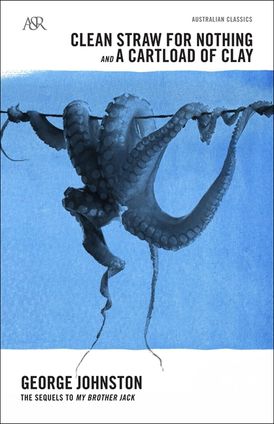 In the sequel to his semi-autobiographical novel My Brother Jack, George Johnston concludes his Meredith trilogy in this brilliantly evocative, single volume of books two and three: Clean Straw for Nothing (winner of the Miles Franklin Award) and A Cartload of Clay.
Set against the backdrop of a Greek island, Clean Straw for Nothing follows the story of successful war correspondent and retired journalist David Meredith as he abandons his career for a life in exile with his beautiful wife Cressida. Johnston focuses on the developing relationship between David and Cressida, exploring the complex and reflective character of David as he questions the nature of success, sexual tensions, expatriation and ill-health. the questions are almost entirely unanswerable and the freedom David craves nearly impossible. In the final episode of the trilogy, David Meredith travels back to Australia, rediscovering his deep affection for his native land after having been so long in Greece. Coming to terms with his new home's deep faults and failings, as well as virtues, it is here that he reviews his life, his pursuit of success and his unfortunate failures. Still without a conclusion to his philosophical concerns, David comes to accept that the meaning of life is the journey we take and is not a price to be given at the end.

George Johnston started his career in journalism with the Melbourne Argus when he was just sixteen. After his work as a correspondent during World War II Johnston began to focus on literature when he moved to the Greek islands with his second wife Charmian Clift. It was the strength of his honesty about humanity and relationships that earned him his place in Australia’s literary canon. Johnston in 1970 after a long battle with tuberculosis, but his enduring myth and greatness lives on through two semi-autobiographical works for which he was awarded the Miles Franklin Award in 1964 for My Brother Jack and in 1969 for Clean Straw for Nothing.

Other Works by George Johnston