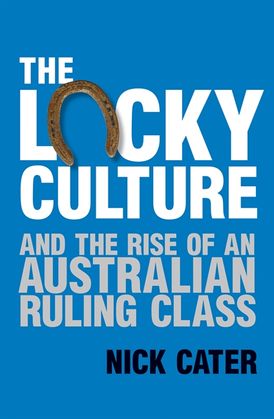 Nick Cater is a senior editor at THE AUSTRALIAN. Born in Britain, he fell in love with the idea of Australia at an early age. He made the decision to migrate while on assignment for the BBC to covering the Australian bicentenary in 1988.  Finding a job as a reporter at THE ADVERTISER, he has been a journalist at News Limited ever since. He was appointed to senior editorial positions at the DAILY TELEGRAPH and the SUNDAY TELEGRAPH before joining THE AUSTRALIAN in 2004

Other Works by Nick Cater

The Lucky Culture And The Rise Of An Australian Ruling Class