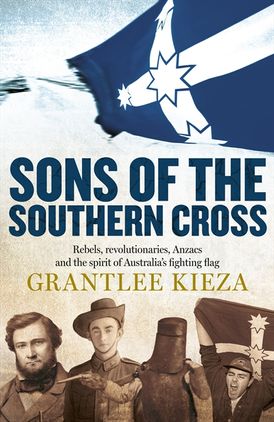 Tales of the iconic flag that came represent the rebellious Australian spirit, from Eureka to Ned Kelly to Gallipoli and beyond

Ever since it was launched in the minefields of Victoria the Southern Cross flag has been a symbol for a rebellious Australian spirit - from the battles of Eureka to those of Ned Kelly, from the birth of the Labor Party to the Anzacs at Galliopoli. the men and women involved took the flag as their symbol. But as much as it became a metaphor for anti-establishment heroics, the flag also had a darker side; xenophobia, racism, intolerance and violence. Grantlee Kieza tells the story of the flag through the stories of the people who fought under it, the miners, the soldiers, the bushrangers, the journalists and politicians, who shaped Australia. He takes readers from the slums of Ireland to the goldfields of Victoria, and then on to the courtrooms, pubs and hideouts where revolutions were hatched. through the raw and impassioned characters trying to make a life in a new nation, he brings Australia's renegade history vividly to life.

'Engagingly written ... one of the most nuanced portraits to date' -- The Australian

'A staggering accomplishment that can't be missed by history buffs and story lovers alike' -- Betterreading.com.au

'A free-flowing biography of a great Australian figure' --- John Howard

'The author writes with the immediacy of a fine documentary ... an easy, informative read, bringing historic personalities to life' -- Ballarat Courier