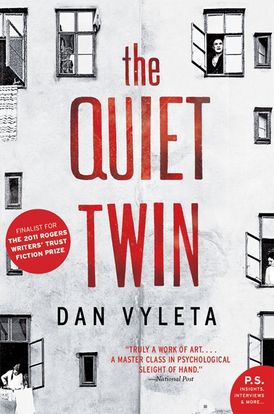 Vienna under the Nazis. A string of murders throws the city into a state of anxiety. Anton Beer, a young doctor who has made a study of forensic psychology, is asked by the retired Professor Speckstein to investigate the slaughter of his dog, which may or may not be related to the murders. It is an unwelcome request: Speckstein’s job is to spy on the building’s residents for the Party, and Doctor Beer has his own reasons for keeping his private life hidden from public scrutiny. Beer’s life becomes further complicated when in a neighbour’s apartment he discovers a paralyzed young woman, deathly ill from a mysterious ailment, and smuggles her into his home to nurse her in secret.

In a story that is gripping from start to finish, Dan Vyleta deftly captures the paranoia of totalitarian Austria. Imbued with menace and uncertainty, The Quiet Twin reveals the temperament of a diseased society where all actions are coloured by the possibility of evil.