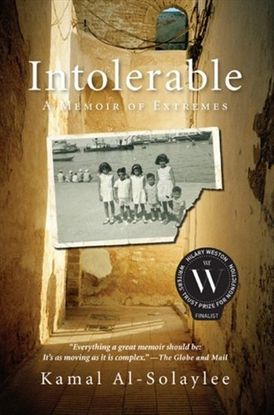 Amazon.ca Best Book of the Year

WINNER of the Toronto Book Award

FINALIST for the Hilary Weston Writers' Trust Prize for Nonfiction, the Lambda Literary Award for Gay Memoir/Biography, and the OLA Forest of Reading Evergreen Award

A Globe and Mail and Amazon.ca Best Book of the Year and a Canadian Booksellers' Top Pick for LGBT Books of the Year

In the 1960s, Kamal Al-Solaylee’s father was one of the wealthiest property owners in Aden, in the south of Yemen, but when the country shrugged off its colonial roots, his properties were confiscated, and the family was forced to leave. The family moved first to Beirut, which suddenly became one of the most dangerous places in the world, then Cairo. After a few peaceful years, even the safe haven of Cairo struggled under a new wave of Islamic extremism that culminated with the assassination of Anwar Sadat in 1981. The family returned to Yemen, a country that was then culturally isolated from the rest of the world.

As a gay man living in an intolerant country, Al-Solaylee escaped first to England and eventually to Canada, where he became a prominent journalist and academic. While he was enjoying the cultural and personal freedoms of life in the West, his once-liberal family slowly fell into the hard-line interpretations of Islam that were sweeping large parts of the Arab-Muslim world in the 1980s and 1990s. The differences between his life and theirs were brought into sharp relief by the 2011 revolution in Egypt and the civil war in Yemen.

Intolerable is part memoir of an Arab family caught in the turmoil of Middle Eastern politics over six decades, part personal coming-out narrative and part cultural analysis. This is a story of the modern Middle East that we think we know so much about.

“This beautiful book about a family’s tortured relationship to history–and a region’s fraught relationship to modernity–is everything a great memoir should be: It’s as moving as it is complex.” — The Globe and Mail

“Intolerable brings [Al-Solaylee’s] skill as a cultural analyst to the spiritual ailments of the Arab world. . . . Powerful, heartfelt . . . necessary reading for anyone who cares about Canada’s place in the world.” — The Walrus

“This is [a book] about survival and identity on many levels. The whole story is so singular and unlike any biography I have ever read. I could not put it down.” — Maclean’s

“A fascinating personal story and a history of a once-liberal family transformed by the politics and turmoil of the Middle East.” — The Next Chapter, CBC Radio

“An astounding read.” — Canada AM

“Here is a courageous personal history, all the more powerful for what it asks of every reader: What would you have done?” — Wayson Choy, author of All That Matters

“An important and captivating read.” — Xtra!

“A bulls-eye of individual truth telling as well as an apt and timely metaphor . . . a moving and wrenching reminder of the urgent need for integrity.” — Lambda Literary

“A heartbreaking memoir of a man out of place and time. Tracing the Middle East through the 1980s and ‘90s, this is a personal coming-out narrative with a difference.” — The Sun Times (Owen Sound)

“A brilliant and utterly mesmerizing memoir. . . . The book is informative and emotionally satisfying and a credit to Al-Solaylee’s heart-baring skill. It is enthralling, entertaining and a must-read.” — Fab Magazine

“[A] touching account of a gay man’s journey to self-awareness. . . . The story gains in poignancy against the backdrop of a Middle East beset by conflict, economic decline and the rise of political Islam.” — Literary Review of Canada

“I don’t think you’ll find a more painfully honest memoir on the bookshelves.” — Inside the News with Peter Mansbridge

“A beguiling memoir. . . . I’ve read many books on Islam and the Arab world, but none with the intimacy and emotional weight of this one. . . . An immigrant tale, a queer history, a geopolitical lesson, and above all, it’s a love story.” — Stephanie Nolen, author of 28: Stories of AIDS in Africa

“Kamal Al-Solaylee has written a powerful memoir that will lift your spirits and break your heart.” — Margaret Wente

“[An] inspiring story. . . . Al-Solaylee captuers the historical moment in a way that’s real and compelling.” — In Toronto