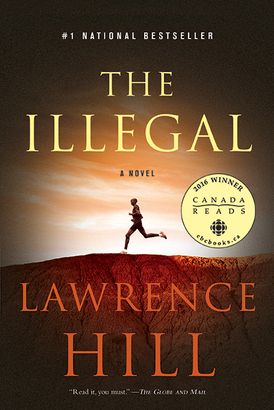 Like every boy on the mountainous island of Zantoroland, running is all Keita's ever wanted to do. In one of the poorest nations in the world, running means respect. Running means riches—until Keita is targeted for his father's outspoken political views and discovers he must run for his family's survival.

He signs on with notorious marathon agent Anton Hamm, but when Keita fails to place among the top finishers in his first race, he escapes into Freedom State—a wealthy island nation that has elected a government bent on deporting the refugees living within its borders in the community of AfricTown. Keita can stay safe only if he keeps moving and eludes Hamm and the officials who would deport him to his own country, where he would face almost certain death.

This is the new underground: a place where tens of thousands of people deemed to be "illegal" live below the radar of the police and government officials. As Keita surfaces from time to time to earn cash prizes by running local road races, he has to assess whether the people he meets are friends or enemies: John Falconer, a gifted student struggling to escape the limits of his AfricTown upbringing; Ivernia Beech, a spirited old woman at risk of being forced into an assisted living facility; Rocco Calder, a recreational marathoner and the immigration minister; Lula DiStefano, self-declared queen of AfricTown and madam of the community's infamous brothel; and Viola Hill, a reporter who is investigating the lengths to which her government will go to stop illegal immigration.

Keita's very existence in Freedom State is illegal. As he trains in secret, eluding capture, the stakes keep getting higher. Soon, he is running not only for his life, but for his sister's life, too.

Fast moving and compelling, The Illegal casts a satirical eye on people who have turned their backs on undocumented refugees struggling to survive in a nation that does not want them. Hill's depiction of life on the borderlands of society urges us to consider the plight of the unseen and the forgotten who live among us.

A twisting, intricately woven yarn that spins itself out at an incredible pace. . . . In The Illegal, Hill takes on the snarled, pressing issues of our moment in time. . . . His larger moral questions linger, provocatively. - The Globe and Mail

The Illegal is a page turner. . . . The parallel world Hill has created allows for a perhaps fantastical overcoming of obstacles that is both exhilarating and heartening. - Toronto Star

The narrative structure of The Illegal is artful and suspenseful, the themes it addresses timely and prescient. Most of all, it is a thrilling story that paints a rich portrait of complex experiences too often reduced to a single media image. - Winnipeg Free Press

[The Illegal] explores many charged issues and questions. . . . [It] will, no doubt, remain in readers’ minds, and may help deepen our urgent dialogue about race and immigration. - Quill and Quire

Deeply satisfying . . . shot through with humor and humanity. . . . [A] timely and affecting story. - Booklist

Pushing the story forward is a character who has the kind of determination, bravery, and loyalty that most people could only strive for. . . . He is the kind of character you will root for all the way to the finish line. My rating: 5/5. - Newstalk 1010, Bookends review

Hill has masterfully portrayed the voices lost in our contemporary discussions of immigration. This is a compelling and thought- provoking examination of the challenges any nation faces when we fail to serve as our brother’s and sister’s keepers across borders, nationality, and race. A must-read. - Heidi W. Durrow, New York Times-bestselling author of The Girl Who Fell from the Sky

“Hill has outdone himself with his latest novel. . . . His characters are authentic, and each is indispensable. . . . Captivating.” - Library Journal (starred review)