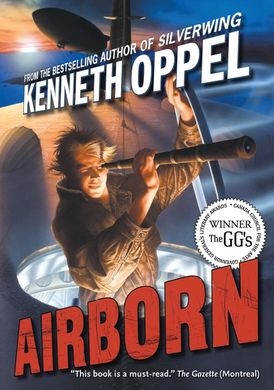 Enter a past in which airplanes have never been invented, giant airships rule the skies and the glittering skyscrapers of Lionsgate City, Canada’s greatest metropolis, rise near the Pacificus Ocean. When Matt Cruse, cabin boy on the luxury airship Aurora, fearlessly performs a dramatic rescue to save an old man from his damaged hot air balloon, he doesn’t know what events he’s setting in motion. Will he and the balloonist’s fiery granddaughter, Kate de Vries, be able to solve the mystery of impossible flying creatures seen among the clouds? And will they figure it out before pirates and shipwreck end their voyage forever?
Winner of the Governor General’s Award for Children’s Literature and many other national and international honours, Kenneth Oppel’s tale of aerial adventure has fired the imaginations of readers around the world. An instant classic!