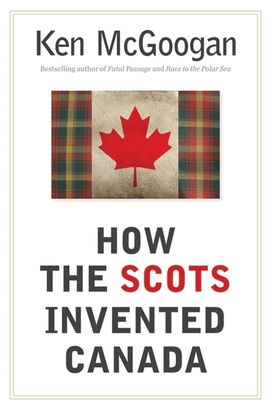 No matter where you enter the history of Canada – through exploration, politics, business, education or literature -- you find that the Scots and their descendants have played a leading role. Today, almost five million Canadians identify themselves as Scottish, and their influence is felt throughout the land. Starting with his own deep roots in Scotland and early Canada, Ken McGoogan has created a lively, entertaining narrative that focuses on more than sixty Scots who have led the way in shaping this country.

Early arrivals included explorers Alexander Mackenzie, Simon Fraser and the “Scotch West Indian,” James Douglas. Later, Scots such as Lord Selkirk and John Galt encouraged thousands to immigrate. Nation-builders followed, among them John A. Macdonald, James McGill and the reformer Nellie McClung. Then came the visionaries, Scottish Canadians such as Tommy Douglas, Doris Anderson and Marshall McLuhan, who have turned Canada into a nation that revels in diversity.

McGoogan commemorates the first settlers to land at Pictou, Nova Scotia, and celebrates such hybrid Canadians as the Cherokee Scot John Norton, Thérèse MacDonald Casgrain and the kilt-loving John George Diefenbaker. He honours the war contributions of Scottish Canadian regiments, and he toasts Sir Walter Scott and the beloved Robbie Burns. Beautifully illustrated and handsomely packaged, How the Scots Invented Canada is an exuberant celebration of the building of a nation.