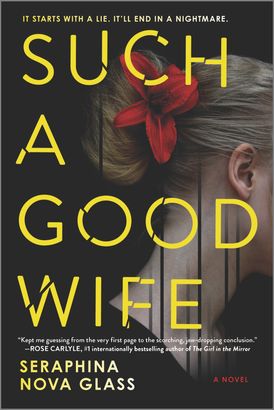 Betrayal was just the beginning…

Melanie Hale is a devoted mother to her two children, a diligent caregiver to her ailing mother-in-law and a trusted neighbor in their wealthy Louisiana community. Above all, she’s a loving partner to her wonderful husband, Collin.

Then there are the parts of herself that Mel keeps hidden. She’s exhausted, worried and unfulfilled. So much so that one night, after a writers’ group meeting, Mel begins an affair with a successful local author named Luke. Suddenly she’s transformed into a role she doesn’t recognize—a woman who deceives with unseemly ease. A woman who might be capable of just about anything.

When Mel finds Luke’s dead body in his lavish rented house, she realizes just how high the stakes have become. Not only does she have to keep her affair a secret in order to preserve her marriage, but she desperately needs to avoid being implicated in Luke’s death. But who would want to kill him? Who else in her life is keeping secrets? And most terrifying of all, how far will they—and she—go to keep those secrets hidden?

“Seraphina Nova Glass’s twisty new thriller plunges the reader into a dark, compelling world of lies, adultery and murder. Bold, racy and masterfully plotted, Such a Good Wife kept me guessing from the very first page to the scorching, jaw-dropping conclusion.”
--Rose Carlyle, #1 internationally bestselling author of The Girl in the Mirror


"Such a Good Wife hooked me from page one and didn’t let go...the big reveal was both shocking and satisfying at the same time. And that ending – wow – dark in the most delicious way. Clear your calendar because once you open this book you won’t want to close it until after you’ve read the last page!"--Amber Garza, author of When I Was You

In Such a Good Wife, Seraphina Nova Glass weaves a deliciously dark tale starring Melanie, a loving and overworked mother and wife having an affair with the handsome Luke…until he turns up dead. If you think you've figured out the culprit, think again. A sly and pulse-pounding murder mystery set in steamy Louisiana.-Kimberly Belle, internationally bestselling author of Stranger in the Lake


"A juicy tight-rope of a thriller that sees a woman teetering on the perilous line between lust and love as deception, betrayal and murder threaten to destroy her seemingly perfect life."--Katie Tallo, author of Dark August


"Such a Good Wife is a terrifically engaging thriller.  I couldn't turn the pages fast enough!"  - Emily Gray Tedrowe, author of The Talented Miss Farwell


"[An] uplifting but never saccharine psychological thriller... The pleasure of this book comes from seeing [the protagonist] morph from mildly depressed suburban housewife into a woman who’s unafraid of fighting fire with fire. Glass remains a writer to watch."--Publishers Weekly

"Glass weaves a taut web of suspicion, murder and revenge in this chilling tale. Sinister characters and blind ends increasingly heighten the tension until the harrowing final climax. Add Someone’s Listening to your must read list!” —Liv Constantine, internationally bestselling author of The Last Mrs. Parrish

“Unputdownable. I found myself suspecting everyone at some point. Twisty, original and a must-read—highly suspenseful and cleverly written.” —Karen Hamilton, bestselling author of The Perfect Girlfriend, on Someone's Listening

"A taut and intriguing suspense that held my attention from the very first page. I thought I had it figured out, but I had no idea what was in store. A stunning and impressive debut." —Alessandra Torre, New York Times bestselling author, on Someone's Listening

Seraphina Nova Glass is a professor and playwright-in-residence at the University of Texas, Arlington, where she teaches film studies and playwriting. She holds an MFA in playwriting from Smith College, and she's also a screenwriter and award-winning playwright. Seraphina has traveled the world using theatre and film as a teaching tool, living in South Africa, Guam and Kenya as a volunteer teacher, AIDS relief worker, and documentary filmmaker.

Other Works by Seraphina Nova Glass

On a Quiet Street