A Novel Inspired by a Real-Life Female Spy 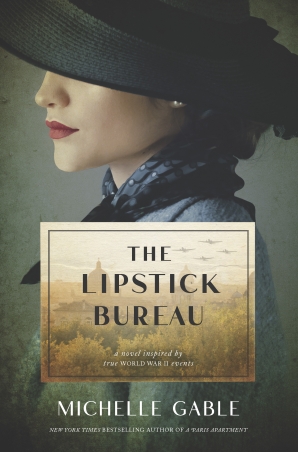 A Novel Inspired by a Real-Life Female Spy

Inspired by a real-life female spy, a WWII-set novel about a woman challenging convention and boundaries to help win a war, no matter the cost.

1944, Rome. Newlywed Niki Novotná is recruited by a new American spy agency to establish a secret branch in Italy's capital. One of the OSS's few female operatives abroad and multilingual, she's tasked with crafting fake stories and distributing propaganda to lower the morale of enemy soldiers.

Despite limited resources, Niki and a scrappy team of artists, forgers and others—now nicknamed The Lipstick Bureau—find success, forming a bond amid the cobblestoned streets and storied villas of the newly liberated city. But her work is also a way to escape devastating truths about the family she left behind in Czechoslovakia and a future with her controlling American husband.

As the war drags on and the pressure intensifies, Niki begins to question the rules she's been instructed to follow, and a colleague unexpectedly captures her heart. But one step out of line, one mistake, could mean life or death…

“Inspired by little-known history, The Lipstick Bureau is a gripping, fascinating read about one woman’s courage and determination during WWII.”
—Kelly Rimmer, New York Times bestselling author of The Warsaw Orphan

“A brilliant, gripping historical novel… Well researched and smartly told, this novel is a must read for World War II buffs and those who like a peek behind the curtain of the role women played in it.”
—Library Journal

“Gable’s deeply personal historical fiction vividly conjures the deprivations of war-torn Rome and the tenacity and creativity of a valiant, rag-tag group charged with changing the course of history.”
—Booklist

“The Lipstick Bureau is a cracking good story, and a tribute to the courage and ingenuity of intelligence agents whose work has remained secret for so long.”
—Shelf Awareness

“A delight from start to finish. Michelle Gable skillfully twines the narratives of two effervescent heroines. The result is a literary feast any booklover will savor!”
—Kate Quinn, New York Times bestselling author of The Rose Code, on The Bookseller's Secret

“Featuring a colorful, witty, tenacious cast of characters, The Bookseller’s Secret is a delightful tribute to an intriguing historical legend.”
—Kristina McMorris, New York Times bestselling author of Sold on a Monday

“With a vivid real-and-imagined cast of unforgettable characters, Gable expertly and cleverly delivers wit, humor, and intrigue in full measure on every page.”
—Susan Meissner, bestselling author of The Nature of Fragile Things, on The Bookseller's Secret

“The Bookseller’s Secret is a captivating story. Michelle Gable has a gift for describing complex, charming characters. This is an engrossing page-turner about books and war, and finding love in unexpected places.”
—Gill Paul, bestselling author of The Collector’s Daughter

“Gable’s witty narrative effortlessly moves between two time periods and is enriched with cameos by historical figures and authentic, memorable characters. Historical fiction fans will be riveted from the first page.”
—Publishers Weekly (STARRED REVIEW) on The Bookseller's Secret

“A cunning blend of historical fiction, fetching romance, and literary thriller, Gable’s newest novel is sure to reinvigorate interest in Mitford and beguile fans of light-hearted relationship fiction.”
—Booklist (STARRED REVIEW) on The Bookseller's Secret -

MICHELLE GABLE is the New York Times bestselling author of A Paris Apartment, I'll See You in Paris, The Book of Summer, and The Summer I Met Jack. She attended the College of William & Mary and spent twenty years working in finance before becoming a full-time writer. She grew up in San Diego and lives in Cardiff-by-the-Sea, California. Find her on Instagram, Twitter, or Pinterest, @mgablewriter.

Other Works by Michelle Gable