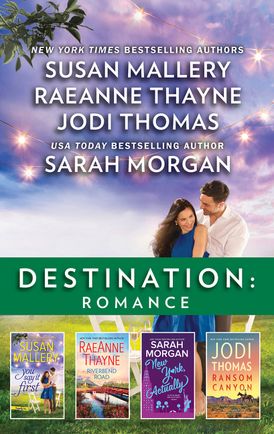 You Say It First - Susan Mallery

Sculptor Nick Mitchell grew up in a family of artists and learned from his volatile father that passion only leads to pain. As he waits on a new commission, he takes a day job as a humble carpenter at a theme wedding venue. The job has its perks – mainly the venue’s captivating owner, Pallas Saunders.

Molly and Daniel both think they know everything about relationships. But as they try – and fail – to resist their undeniable chemistry, they’ll soon discover they just might have a lot left to learn...

Rancher Staten Kirkland, the last descendant of Ransom Canyon’s founding father, is rugged and practical to the last. No one knows that when his troubling memories threaten to overwhelm him, he runs to lovely, reclusive Quinn O’Grady...or that she has her own secret that no one living knows.

#1 NYT bestselling author Susan Mallery writes heartwarming, humorous novels about the relationships that define our lives—family, friendship, romance. She's known for putting nuanced characters in emotional situations that surprise readers to laughter. Beloved by millions, her books have been translated into 28 languages. Susan lives in Washington with her husband, two cats, and a small poodle with delusions of grandeur. Visit her at SusanMallery.com.

USA Today bestselling author Sarah Morgan writes lively, sexy contemporary stories for Harlequin.
Romantic Times has described her as 'a magician with words' and nominated her books for their Reviewer's Choice Awards and their 'Top Pick' slot. In 2012 Sarah received the prestigious RITA® Award from the Romance Writers of America. She lives near London with her family. Find out more at www.sararahmorgan.co

New York Times bestselling author RaeAnne Thayne finds inspiration in the beautiful northern Utah mountains where she lives with her family. Her books have won numerous honors, including six RITA Award nominations from Romance Writers of America and Career Achievement and Romance Pioneer awards from RT Book Reviews. She loves to hear from readers and can be reached through her website at www.raeannethayne.com.

New York Times bestselling author Jodi Thomas is a fifth-generation Texan who sets many of her stories in her home state, where her grandmother was born in a covered wagon. She is a certified marriage and family counselor, a Texas Tech graduate and writer-in-residence at West Texas A&M University. She lives with her husband in Amarillo, Texas.

Other Works by Jodi Thomas