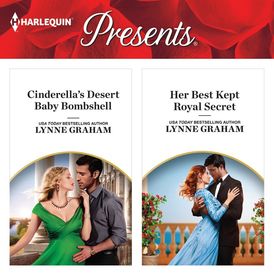 From substitute bride…
To carrying the royal heir!

For her family’s sake, penniless Tatiana Hamilton must marry Prince Saif after his original bride, her cousin, disappears. At least the ice-cold sheikh promises to end their sham marriage quickly. Until, on their opulent honeymoon, their simmering chemistry grows too hot to ignore…and Tati discovers she’s pregnant!

Saif closed his heart when his mother abandoned him. He’ll never do the same to his own child! But as he opens his mind to fatherhood, can brooding Saif also open himself to a relationship as real as their unstoppable passion?

Reunited for one night
Bound by the scandalous consequences!

Playboy prince Angelino Diamandis has learned the hard way to hide his true emotions. Especially his inability to forget innocent Gaby and the passion they almost shared! Until a surprise meeting causes their still-simmering chemistry to instantly and inescapably explode…

Independent Gaby has always known how dangerous Angel could be to her heart. She thought nothing could be more life-changing than waking up in the prince’s bed. Until she’s standing in front of Angel a year later, sharing her shocking secret—his son!


From Harlequin Presents: Escape to exotic locations where passion knows no bounds.

Lynne Graham lives in Northern Ireland and has been a keen romance reader since her teens. Happily married, Lynne has five children. Her eldest is her only natural child. Her other children, who are every bit as dear to her heart, are adopted. The family has a variety of pets, and Lynne loves gardening, cooking, collecting allsorts and is crazy about every aspect of Christmas.

Other Works by Lynne Graham

The Heirs His Housekeeper Carried

Promoted to the Greek's Wife

The Ring the Spaniard Gave Her