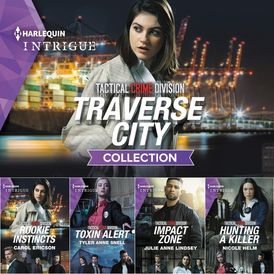 The Tactical Crime Division, a specialized unit of the FBI, handles the toughest cases in the most remote locations. In these four books, the agents based in Traverse City will stop at nothing to keep people safe!

New TCD team member Aria Calletti is determined to find out why women are turning up dead—especially since an infant was left at the most recent crime scene. Fortunately for the TCD’s newest operative, the baby’s uncle, Grayson Rhodes, has sacrificed everything to discover the truth following the disappearance of his half sister. But can a civilian-turned-undercover-dockworker and a brand-new agent take down a formidable drug kingpin?

Following a deadly anthrax attack, TCD’s biological weapons expert Carly Welsh springs into action. Problem is, the Amish trust no one—especially not an FBI special agent. That’s where Noah Miller comes in. Even though the rancher left the fold decades ago, the community trusts him…and so does Dr. Welsh. But even their combined courage and smarts might not be enough against sinister forces that want them both to perish.

Veteran TCD special agent Max McRay is the definition of unflappable. But when a serial bomber wreaks havoc in the town where his ex-wife, Allie, and infant son live, suddenly a high-profile case becomes personal. The bomber is ruthless…and now Max’s family is in his sights. Can the TCD stop this killer’s deadly rampage before Max and Allie pay with their lives?

Hunting a Killer by Nicole Helm

When K-9 handler Serena Lopez discovers her half brother’s a fugitive from justice, she must find him—and his dangerous crew. It’s a good thing that her partner is infuriatingly efficient and handsome lead agent Axel Morrow. But as smart and cunning as the duo may be, it’s a race against time to catch the armed and dangerous criminals before they kill again.

Carol Ericson lives in southern California, home of state-of–the-art cosmetic surgery, wild freeway chases, and a million amazing stories. These stories, along with hordes of virile men and feisty women clamor for release from Carol’s head until she sets them free to fulfill their destinies and her readers’ fantasies. To find out more about Carol and her current books, please visit her website at www.carolericson.com, “where romance flirts with danger.”

Tyler Anne Snell writes and reads a little bit of everything but has a soft spot for thrillers, mysteries, and sexual tension. When she isn't writing or reading, she's re-watching her favorite TV series or playing video games. The first book she finished in one sitting was a Harlequin Intrigue. It taught her to appreciate the power of a good book.

Tyler lives in Alabama with her same-named husband and their mini lions.

Julie is a mother of three, wife to a sane person and ringmaster at the Lindsey Circus. She lives with her husband and three small children in rural Ohio where she was born and raised. You can find her online day or night, amped up on coffee and wielding a book.

Other Works by Nicole Helm