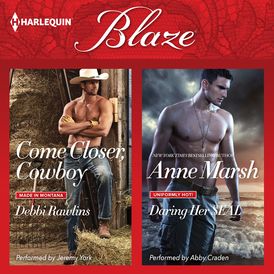 Mallory Brandt needs a change. The kind of change that makes a gal close her Hollywood bar, move 1400 miles across the country, and start a new life in Blackfoot Falls, Montanain four weeks. Coincidentally, that's how long her oldest friend, Gunner Ellison, has been out of the countryand since they had super-hot, tequila-fueled sex for the first time.

And man, Gunner is pissed. Mallory never returned his calls, never told him she was leaving. Now he's shown up in Blackfoot Fallsand he's not leaving until he gets answers. Only problem is, their searing chemistry keeps getting in the way, distracting them both from the feelings they're afraid to acknowledgeand the fact that their friendship will never be the same!

Subject: Navy SEAL Levi Brandon
Mission: Sort out his accidental marriagewithout sleeping with his "wife!"
Devil-may-care Navy SEAL Levi Brandon faces a terrifying task: telling Ashley Dixon that their faux wedding during their last mission together was actually real. It's bad enough that she completely loathes him, but she's DEA. Levi will be lucky to get away with his life
Now Ashley and Levi have returned to Fantasy Island to sort things outand are tempted to play a dangerous game of lust and restraint. A game of dares. All Levi has to do is keep himself from having sex with the hottie DEA agent. But Ashley's playing to winand darers always go first.

Debbi has written over 50 books for Harlequin since 1994, in several different lines including: Harlequin American, Harlequin Intrigue, Love & Laughter, Duets and Harlequin Blaze. She lives in rural, beautiful Utah with far too many rescued cats and dogs. Although she hasn't lived there for years, she still misses her home state of Hawaii. She's currently working on a western Blaze series, one of her favorite genres.

Anne Marsh writes sexy contemporary and paranormal romances because the world can always enjoy one more alpha male. She started writing romance after getting laid off from her job as a technical writer—and quickly decided happily-ever-afters trumped software manuals. She lives in North Carolina with her two kids and five cats.

Other Works by Anne Marsh

Cowboy All Night & A SEAL's Desire

In Pursuit of His Wife & Twins for the Texan

One Sizzling Night & A SEAL's Touch