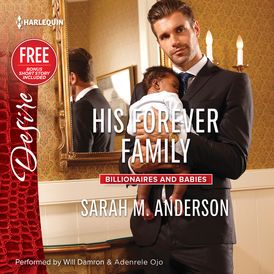 Tiny and helplessthe abandoned newborn that venture capitalist Marcus Warren finds during a morning run takes him by surprise. So does the sudden longing for his capable assistant, Liberty Reese, who reveals her tender side with the baby.

But Liberty must resist her gorgeous boss''s advances. Her secrets could destroy his trust, her career and the chance to care for the foster child they are both coming to love. Even so, she can''t deny the heat between themor the fear that her past will end their chance to create a forever family.

I spent my childhood wandering through the woods behind our house, pretending to be an Indian. Later, when I fully discovered horses, it prompted my mother the history teacher to put anything and everything about the High Plains tribes into my hands. This infatuation lasted for over a decade.

And through it all, I knew I wanted to write novels. I just had no idea how to do it.

It took a caffeine-fueled car trip with my 92-year-old grandmother and two-year-old son in July of 2007 to awaken my Muse. That story would become my first book as I figured out how, exactly, one writes a novel.

One character led to another, and before long, I found my characters out in South Dakota, among the Lakota Sioux tribe. Modern-day cowboys, who are the Indians - without planning it this way, I find myself writing about the people and places that held my imagination throughout my childhood.

In 2010, I sold my first novel, the award-winning Indian Princess, to Stacy Boyd of Harlequin Desire. The book will be released in 2012. Stay tuned for more updates!

I live in Illinois with my husband, son, Jake the Three-Legged Wonder Wiener dog, and Gater the Four-Legged Mutt. I am a writer and editor at Mark Twain Media, Inc., an educational publishing company. I am a member of Romance Writers of America, the Chicago-North RWA, Women Writing the West, and the International Association for the Study of Popular Romance. When not chasing my son around or tweaking my books, I attempt to read, knit, and occasionally complete a home improvement project in my historical 1895 Queen Anne house.

Sarah loves to hear from readers via her email: [email protected]

His Baby Agenda & A Surprise for the Sheikh