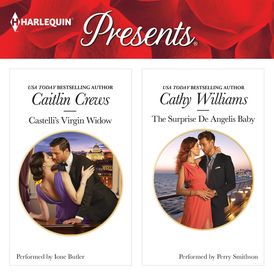 "Saint Kate is a myth"
Reckless magnate Luca Castelli thinks he knows everything about his late father's widow, Kathryn. He won't be fooled by the tabloids' adorationto his mind, this young, achingly beautiful woman is no saint! So when terms of the will force Luca to become Kathryn's boss, he resolves to push her to her very limits
But as Kathryn rises to his challenge, the fire between them that burns with equal parts hatred and lust only grows hotter! Until one night, Luca discovers Kathryn's innocence runs deeper than he could ever have imagined She belongs to him, and him alone!

Billionaire businessman Daniel De Angelis's plan was simple: a few undercover days at sea to uncover the weaknesses of the ship he plans to acquire. Instead he discovers a vulnerability of his owngorgeous art teacher Delilah Shaw!

The terms of their liaison were clear: two weeks of complete sensual surrender that ends the moment the cruise ship docks. But stepping back onto dry land brings Delilah back to earth in more ways than one. Now she's facing two very shocking truths: Daniel lied about his identity while tempting herand now she's pregnant with his baby!

USA Today bestselling, RITA-nominated, and critically-acclaimed author Caitlin Crews has written more than 100 books and counting. She has a Masters and Ph.D. in English Literature, thinks everyone should read more category romance, and is always available to discuss her beloved alpha heroes. Just ask. She lives in the Pacific Northwest with her comic book artist husband, is always planning her next trip, and will never, ever, read all the books in her to-be-read pile. Thank goodness.

Cathy Williams is a great believer in the power of perseverance as she had never written anything before her writing career, and from the starting point of zero has now fulfilled her ambition to pursue this most enjoyable of careers. She would encourage any would-be writer to have faith and go for it! She derives inspiration from the tropical island of Trinidad and from the peaceful countryside of middle England. Cathy lives in Warwickshire her family.

Other Works by Cathy Williams

Engaged to Her Ravensdale Enemy & Seduced into Her Boss's Service

A Cowboy for All Seasons

Seduced into Her Boss's Service

A Cowboy For All Seasons/Spring/Summer

A Cowboy for All Seasons