New Year at the Boss's Bidding & Theseus Discovers His Heir 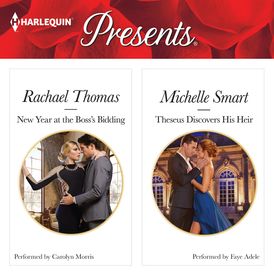 New Year at the Boss's Bidding & Theseus Discovers His Heir

Jilted bride Tilly Rogers hopes her luck is changing when she's offered a prestigious catering contract for billionaire businessman Xavier Moretti's New Year's Eve party. But then she ends up snowbound alone with her bossand at his bidding!

It's the end of the year and the end of Tilly's contract, which leaves Xavier free to seduce her at his will. Hardly shy of a challenge, this notorious playboy makes it his resolution to have virgin Tilly crumbling by his experienced touch.

Before the snow settles, Xavier is determined to have Tilly under a brand-new set of tantalizing terms!

THE PRINCE'S SECRET LOVE CHILD!
Shocking news has rocked the Mediterranean Principality of Agon. Prince Theseussecond in line to the throneis rumored to have fathered a secret love child.
Reports surfaced the moment stunning royal biographer Joanne Brooks was hired to memorialize King Astraeus's reign. It seems she's brought more than pens and paper!
Witnesses suggest that five years ago, our onetime bad boy prince traveled the world in disguise as engineer Theo Petakis and met Joanne. This reporter wants to know how Ms. Brooks will react when our commanding prince wants to claim his child and his bride!

Rachael has loved writing stories since she was a small child, but it was the discovery of Mills and Boon as a teenager, that started her love affair with romance. In 2013 she entered Harlequin's So You Think You Can Write competition and her entry earned her a place in the Top Ten. That entry, A Deal Before the Altar became her debut title. Rachael lives in Wales on a farm and loves exploring. Her latest adventure was in the Sahara Desert for charity - and research!

Michelle Smart is a Publishers Weekly bestselling author with a slight-to-severe coffee addiction. A book worm since birth, Michelle can usually be found hiding behind a paperback, or if it’s an author she really loves, a hardback. Michelle lives in rural Northamptonshire in England with her husband and two young Smarties. When not reading or pretending to do the housework she loves nothing more than creating worlds of her own. Preferably with lots of coffee on tap. www.michelle-smart.com.

Other Works by Michelle Smart

Taken By the Night