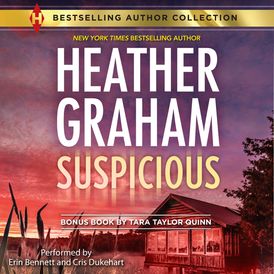 When Jesse Crane returned to his roots to serve on the Miccosukee police force, he'd hoped to leave behind the violence of the city and the memories of his murdered wife. But bodies start to pile up in Jesse's corner of the sultry Florida swampland

As he probes these crimes, Jesse is drawn to the beautiful Lorena Fortier, a new hire at the local gator farm and research facility. Lorena is a little too interested in Jesse's investigation, but before he can uncover her true motives, they're both pulled into a dangerous web of greed, ambition and animal cunning. To survive, they'll have to decide whether they can trust each otherbefore the hunters become the hunted.

BONUS BOOK INCLUDED IN THIS VOLUME!

Six months ago, Beth woke up with no memory of her past, a bruised face and a little boy who called her "Mama." Until her memory returns, the most dangerous thing she can do is to fall for the sheriffthe one man who can uncover the truth and destroy the person she's become.

A USA Today bestselling author of 100 novels in twenty languages, Tara Taylor Quinn has sold more than seven million copies. Known for her intense emotional fiction, Ms. Quinn's novels have recieved critical acclaim in the UK and most recently from Harvard. She is the recipient of the Reader's Choice Award, and has appeared often on local and national TV, including CBS Sunday Morning.

Other Works by Tara Taylor Quinn

THE NIGHT IS FOREVER

The Night Is Alive