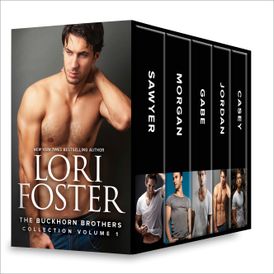 No one loves truer than a Buckhorn man… Don't miss a single fan-favorite story in this box set from New York Times bestselling author Lori Foster!

Sawyer The only doctor in Buckhorn County, Kentucky, Sawyer Hudson knows a thing or two about saving lives. But when he rescues beautiful Honey Malone from a car wreck and nurses her to health at his home, he finds himself dreading the day she's well enough to leave…

Morgan Buckhorn's big, bad sheriff, Morgan Hudson, wants a wife—one who's undemanding and content with small-town life. So why can't he stop thinking about Misty Malone, the brazen city girl who's just found herself on the wrong side of the law?

Gabe Gabe Kasper, the heartthrob of Buckhorn, can have any woman he wants—except for prickly, uptight Elizabeth Parks. All she wants is an interview about Gabe's recent act of bravery. And though he considers himself far from a hero, he'll answer her questions in exchange for kisses…and more.

Jordan Veterinarian Jordan Somerville thinks he wants a woman who's a paragon of virtue. But when he meets single mother and exotic dancer Georgia Barnes, he's suddenly tempted to break all his own rules…

Casey When they were teens, Casey tried to help Emma, but his plans fell through when she ran away without a trace. Years later, she's back, and Casey's determined to prove that he'll always be the man for her…

Lori Foster is a New York Times and USA TODAY bestselling author with books from a variety of publishers, including Berkley/Jove, Kensington, St. Martin's, Harlequin and Silhouette. Lori has been a recipient of the prestigious RT Book Reviews Career Achievement Award for Series Romantic Fantasy, and for Contemporary Romance. For more about Lori, visit her Web site at www.lorifoster.com.

Other Works by Lori Foster