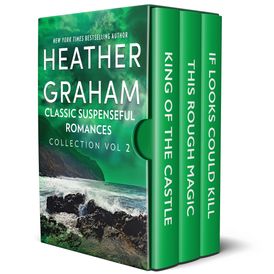 King of the Castle

Back in Ireland for the first time since the mysterious death of her husband, Kit McHennessey finds herself haunted by the unanswered questions from that night. Justin O’Niall, the man who comforted her through the tragedy eight years ago, is as darkly compelling now as he was then. And while she is passionately drawn to him, she is also certain she cannot trust him. Kit must uncover the deadly truths she once fled in order to confront the danger that threatens their future.

Wolves were howling and the moon was full on the night Carly Kiernan reached Castle Vadim. Its walls rose forbiddingly, as if part of the mountains themselves. No less forbidding was Jon, Count Vadim, who dressed in black and called to mind another man, one who feared to face the sun and consorted with the creatures of the night. But this was Halloween! Surely, Carly told herself, by day the count would prove to be no more mysterious than the trick-or-treaters she would have faced at home. But the morning brought only another question: why was she falling in love with such an enigmatic man?

If Looks Could Kill

Madison Adair didn’t witness her famous mother’s brutal murder. But she saw it. That was a lifetime ago, but the nightmares have returned. Only this time they’re of a faceless serial killer stalking women in south Florida. A killer she can’t see but who knows she is watching. Surrounded by her family, Madison knows she should feel safe, but she doesn’t. And how much can FBI agent Kyle Montgomery protect her, when he can’t let go of the past they’ve shared? Madison is Kyle’s only link to the killer, but can they find the truth before the killer strikes again? Because sometimes, it’s what—or who—you can’t see that holds the greatest danger…

New York Times and USA TODAY bestselling author Heather Graham has written more than a hundred novels. She's a winner of the RWA's Lifetime Achievement Award and the Thriller Writers' Silver Bullet. She is an active member of International Thriller Writers and Mystery Writers of America. For more information, check out her website, theoriginalheathergraham.com. You can also find Heather on Facebook and on Twitter, @heathergraham.

THE NIGHT IS FOREVER

The Night Is Alive