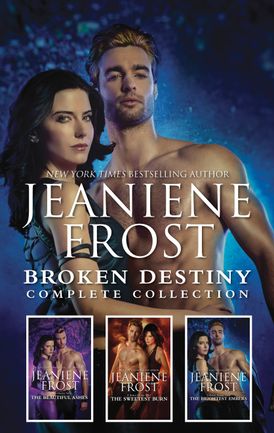 Experience the fan-favorite Broken Destiny series for the first time in one convenient collection. New York Times bestselling author Jeaniene Frost takes on you a journey where mythical secrets, otherworldly danger, and undeniable passion is just the beginning…

Ivy has always seen things that she cannot explain. Strange things. Otherworldly things. But when her sister goes missing, Ivy discovers the truth is far worse—her hallucinations are real, and her sister is imprisoned in a realm beyond Ivy’s reach. The one person who can help her is the dangerously attractive rebel who’s bound by an ancient legacy to betray her.

Conquering a supernatural realm turned out to be easier than getting over a broken heart. But her initial victory has made Ivy a target for revenge, forcing her to reunite with the dangerous — and dangerously sexy — Adrian. Ivy isn’t sure which will be harder: finding the hallowed weapon that will repair the crumbling walls between demon and human realms, or resisting Adrian, who’s decided that come hell or high water, he will make Ivy his…

Adrian’s dark lineage has made him the most powerful of his kind, yet even his incredible abilities might not be enough now. Ivy and Adrian’s scintillating bond has been tested before, but never with so much on the line. Now fate will come head-to-head against true love, and nothing they’ve endured can prepare Ivy and Adrian for the choices they’ll face…