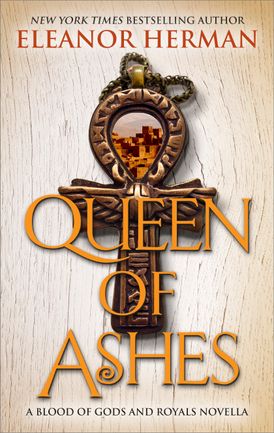 Power, betrayal and desire… It's a dangerous gambit in Queen of Ashes, an ebook companion to the Blood of Gods and Royals series by New York Times bestselling author Eleanor Herman!If you look away from her face, you will die.This is the warning given to the suitors of Queen Laila of Sharuna, who must compete against one another to win the royal Egyptian's affections. One by one, men cower under her penetrating gaze, and one by one, they are executed.That is, until Laila meets two brothers who do not cower before her: Brehan, noble and courageous…and Riel, intelligent and ambitious. As Laila is tempted by both of them and their differing approaches to magic, she decides that there is one thing she wants more than either brother's affection: power.But when Brehan and Riel turn on each other, Laila must choose where her heart truly lies, before the brothers she loves reduce her kingdom to ash. From the New York Times bestselling author of Legacy of Kings, Queen of Ashes shares the secret history of characters who play an unforgettable role in the Blood of Gods and Royals series.