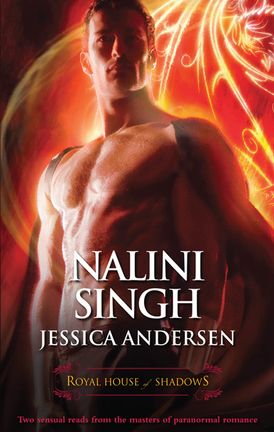 
Lord Of The Wolfyn by Jessica Andersen

For practical Reda Weston, nothing could explain how reading a sexy version of Little Red Riding Hood catapulted her into another realm –– face–to–fang with the legendary wolf–creature who seduced women. A wolf who transformed into a dark, virile man…

Dayn cursed the sorcerer that turned him wolfyn and damned him to a lonely fate. As a beast, he mated with women to gain the strength he needed to save Elden. But as a man, he craved Reda's heated and sizzling touch. With little time left, Dayn had to either embrace his wolf to save his kingdom...or fight it to save his woman.

Lord Of The Abyss by Nalini Singh

As the dark lord who condemns souls to damnation in the Abyss, Micah is nothing but a feared monster. He has no idea he is the last heir of Elden. Only one woman knows –– the daughter of his enemy. Liliana sees past his impenetrable black armour to the prince inside. To help Micah remember, she must brave his dark, dangerous lair. Because they only have until midnight to save Elden.

A lifelong New Englander, Jessica Andersen received a PhD in genetics from Tufts, but when the committee head said her thesis “read like a mystery novel,” she admitted she was also writing romance. She now writes full time, and has penned more than thirty science-themed intrigues and paranormal thrillers that have hit the bestseller lists and been nominated for numerous awards. She lives in CT with a cast of four-legged friends, and is hard at work on her next novel!

NALINI SINGH
New York Times and USA TODAY bestselling author
Nalini Singh loves writing paranormal romances.
Currently working on two ongoing series, she also
has a passion for travel and has been to places as far
afield as Tahiti, Japan, Ireland and Scotland. She
makes her home in beautiful New Zealand. To
find out more about Nalini’s books, please visit her
website, www.nalinisingh.com.

Other Works by Nalini Singh