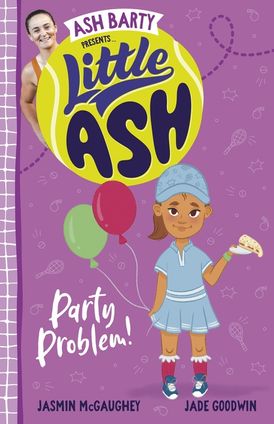 Ash and James have been invited to their friend's birthday. It's a fancy-dress party and of course, Ash is dressed as a tennis player! But when Ash loses her favourite tennis racquet, she is so worried. Even with James's help, will she ever find it?

Australian Ashleigh Barty was a professional tennis player on the Women's Tennis Association tour from 2011 to 2022 (with a break from late 2014 to early 2016). Widely regarded as one of the sport's most naturally talented players, Ash's game style and ability to play a wide variety of shots set her apart from her opponents. Ash's off-court manner endeared her further to the tennis community and fans around the world. With her signature unassuming approach, confidence to forge her own path and commitment to being a good person before all else, she became a role model for many.

Ash announced her retirement from professional tennis in March 2022. Ranked WTA World No. 1 and the reigning ladies singles champion at Wimbledon and the Australian Open, she departed from the sport as one of the most accomplished players ever. Her tennis achievements include: 3 Grand Slam singles titles, 1 Grand Slam doubles title, 12 WTA singles titles, 11 WTA doubles titles and an Olympic bronze medal for mixed doubles. Ash held the WTA World No. 1 ranking for 114 consecutive weeks, the fourth-longest streak in tour history, behind Steffi Graf (186 weeks), Serena Williams (also 186) and Martina Navratilova (156). In all, Ash spent 121 weeks at World No. 1, the seventh most in WTA tour history, surpassed only by Steffi Graf, Martina Navratilova, Serena Williams, Chris Evert, Martina Hingis and Monica Seles.

A proud First Nations woman, Ash is committed to creating sport and education opportunities for youth in communities around Australia. A passionate reader and advocate for children's literacy, Ash has published the best-selling Little Ash series for ages 5 and up. Ash is a huge believer in the long-term benefits of reading for children, and the Little Ash series engages young readers due to its popular themes of sport, family, friendship and school, plus its appealing illustrations and easy-to-read language. Ash's next chapter is yet to be written but will certainly involve a new set of goals and dreams, expanding her community work, spending time with her family and her dogs, and enjoying many sports as a fan.

Jasmin McGaughey is a Torres Strait Islander and African American writer and editor. In 2019 she was lucky enough to be a black&write! editor intern and a Wheeler Centre Next Chapter recipient. She has been able to write for Overland, Kill Your Darlings, SBS Voices & Griffith Review. Jasmin's always loved storytelling, and she is proud to be able to work and learn in this field.

Other Works by Jasmin McGaughey

Jade Goodwin is an illustrator, letterer and arts worker. Having spent a lot of time in her grandparents' screen-printing studio growing up, Jade always felt she would end up working in the creative industry. Jade's passion for creating colourful work aimed at a younger audience is shown through her unique style that she creates in both traditional and digital mediums. Jade's illustrations are exciting and fun. Over the last few years Jade has used lettering projects to explore new ways to convey her connection to her Gamilaraay heritage. Jade has worked on commissions, created and designed original characters and products, and is a published illustrator.

Other Works by Jade Goodwin