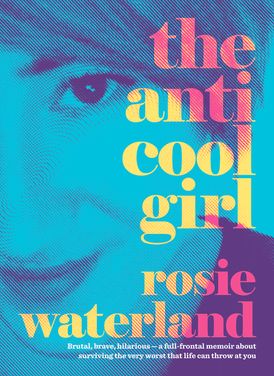 Brutal, brave, hilarious - a full-frontal memoir about surviving the very worst that life can throw at you. Rosie Waterland has never been cool. Growing up in housing commission, Rosie was cursed with a near perfect, beautiful older sister who dressed like Mariah Carey on a Best & Less budget while Rosie was still struggling with various toilet mishaps. She soon realised that she was the Doug Pitt to her sister's Brad, and that cool was not going to be her currency in this life. But that was only one of the problems Rosie faced. With two addicts for parents, she grew up amidst rehab stays, AA meetings, overdoses, narrow escapes from drug dealers and a merry-go-round of dodgy boyfriends in her mother's life. Rosie watched as her dad passed out/was arrested/vomited, and had to talk her mum out of killing herself.As an adult, trying to come to grips with her less than conventional childhood, Rosie navigated her way through eating disorders, nude acting roles, mental health issues and awkward Tinder dates. Then she had an epiphany: to stop pretending to be who she wasn't and embrace her true self - a girl who loved drinking wine in her underpants on Sunday nights - and become an Anti-Cool Girl.An irrepressible, blackly comic memoir, Rosie Waterland's story is a clarion call for Anti-Cool Girls everywhere.'Individual, wounded, brilliant and hilarious' Sydney Morning Herald 'If Augusten Burroughs and Lena Dunham abandoned their child in an Australian housing estate, she'd write this heartbreaking, hilarious book. It made me laugh uproariously, then feel terrible for her, then laugh all over again. Sorry, Rosie.' Dominic Knight, The Chaser'Hilarious, wise, gutsy, clear-eyed, devastating and uplifting. It's a marvel.' Richard GloverThe Anti Cool Girl was shortlisted for the 2016 Indie Book Awards and for the 2016 ABIA Awards for Biography of the Year, and also shortlisted for the 2017 Russell Prize for Humour Writing. She was also the Winner of the 2016 ABIA Awards People's Choice for the Matt Richell Award for New Writer of the Year

Rosie Waterland is a Sydney-based author, podcaster, screenwriter and comedian.  Her first book, The Anti-Cool Girl (HarperCollins, 2015) was a critically-acclaimed national bestseller, winning the ABIA People's Choice Matt Richell Award for New Writer of the Year, and was shortlisted for the Russell Prize for Humour Writing.  In 2017, Rosie launched her podcast Mum Says My Memoir is a Lie, which has been downloaded more than 7 million times and won the Australian Commercial Radio Award for Best Original Podcast. Her latest podcast, Just The Gist, rose to number one on the charts before it was released. Her second book Every Lie I've Ever Told (HarperCollins, 2017) was also a national bestseller. Rosie co-created and co-starred in the ABC satirical political documentary series What's Going On with Jamila Rizvi.  In 2020, Rosie is about to embark on her third national comedy tour Kid Chameleon following the sold-out success of her earlier one-woman shows My Life on the Couch (with Vodka) and Crazy Lady.

Other Works by Rosie Waterland

By the Waters of Liverpool

Twopence to Cross the Mersey

Runaway Girl: A beautiful girl. Trafficked for sex. Is there nowhere to hide?

Don't Leave Me This Way