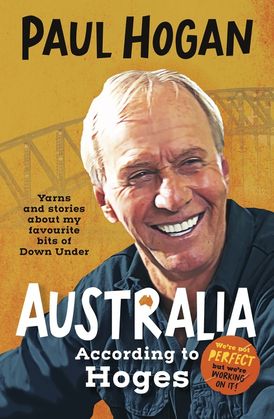 'We're not perfect, but we're working on it' -- Hoges' love letter to Australia

Paul Hogan's ancestors were a couple of Irish blow-ins who arrived in the colony of New South Wales by boat, with a little assistance from the judges of the Old Bailey. Blow-ins from everywhere have been coming ever since, and while it hasn't always been a walk in the park, Hoges reckons this mixed-up mob of old and new inhabitants works most of the time. In fact, according to Hoges, Australia may well be the best country on earth.

In Australia, According to Hoges, the comedy legend explores some of the highways and byways of his country's past and present to map out all that is strange, marvellous and majestic about his homeland and why Australia qualifies as the Eighth Wonder of the World.

From the rich and ancient culture of the island continent's Original human inhabitants to its prison-farm phase, from a baptism by fire through wars and depression to a passion for sport, gambling and outdoor cookery, and from the influence of Marlon Brando on a teenager from Sydney's western suburbs to the culinary wonders brought by new arrivals from all around the world, Hoges portrays a nation that believes in a fair go for all and never takes itself too seriously.

Full of laugh-out-loud yarns from Hoges' and the nation's past, Australia, According to Hoges is a love letter to Down Under. As Hoges says, 'We're not perfect, but we're working on it.'

Paul Hogan AM was a rigger on the Sydney Harbour Bridge before rising to fame in the early 1970s with his own comedy sketch program, The Paul Hogan Show. The series ran for more than a decade, and was popular both in Australia and around the world, introducing hilarious characters such as Leo Wanker, Arthur Dunger and Luigi the Unbelievable. In 1985, Hogan was chosen as Australian of the Year and was inducted into the Order of Australia. In 1986 he starred in his first movie, Crocodile Dundee. It went on to become the most successful independent movie ever, earning him a Golden Globe Award for Best Actor in a Comedy and an Academy Award nomination for Best Original Screenplay, and making him a household name worldwide. Following the success of Crocodile Dundee, Hogan hosted the Academy Awards and starred in several other films, including Crocodile Dundee II, Almost an Angel, Lightning Jack, Charlie & Boots and The Very Excellent Mr Dundee.

Other Works by Paul Hogan