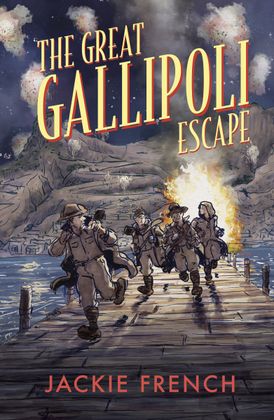 Renowned for her historical fiction titles, Jackie French now tells the story of the brilliant and famous evacuation of Gallipoli.

Sixteen-year-old Nipper and his Gallipoli mates Lanky, Spud, Bluey and Wallaby Joe are starving, freezing and ill-equipped. By November 1915 they know that that there is more to winning a war than courage. The Gallipoli campaign has been lost.

Nipper has played cricket with the Turks in the opposing dugout, dodged rocket fire and rescued desperate and drowning men when the blizzard snow melted. He is one of the few trusted with the secret kept from even most of the officers: how an entire army will vanish from the Peninsula over three impeccably planned nights.

Based on first-hand accounts of those extraordinary last weeks of the Gallipoli campaign, this is the fascinating 'lost story' of how 150,000 men – and their horses and equipment – were secretly moved to waiting ships without a single life lost. An unforgettable story told through the eyes of a boy who lied about his age to defend his country.

A Rose for the Anzac Boys

How High Can a Kangaroo Hop?