The extraordinary story of Rose de Freycinet: wife, stowaway and the first woman to record her voyage around the world 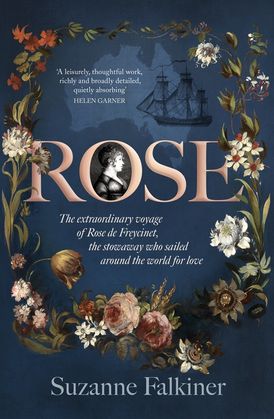 The extraordinary story of Rose de Freycinet: wife, stowaway and the first woman to record her voyage around the world

The voyage of Rose de Freycinet, the stowaway who defied the French for love.

In 1814, in the aftermath of the French Revolution, nineteen-year-old Rose Pinon married handsome naval officer Louis de Freycinet, fifteen years her senior. Three years later, unable to bear parting from her husband, she dressed in men's clothing and slipped secretly aboard his ship the day before it sailed on a voyage of scientific discovery to the South Seas. Living for three years as the sole female among 120 men, Rose de Freycinet defied not only bourgeois society's expectations of a woman in 1817, but also a strict prohibition against women sailing on French naval ships.

Whether dancing at governors' balls in distant colonies, or evading pirates and meeting armed Indigenous warriors on remote Australian shores, or surviving shipwreck in the wintry Falkland Islands, Rose used her quick pen to record her daily experiences, becoming the first woman to circumnavigate the world and leave a record of her journey.

Suzanne Falkiner tells this story of courage, enduring love, curiosity and a spirit of adventure - and of the pivotal voyages that led to it - while revealing a uniquely female view into the hitherto largely male world of 19th-century life at sea.

Suzanne Falkiner is a Sydney writer. After growing up on a sheep station in central western New South Wales, she spent several years travelling in Asia, Europe and South America, and living in Paris, Umbria, and New York. Suzanne is the author of 13 books, most recently, Mick: A Life of Randolph Stow, which was short-listed for several biography awards. It was while researching this last book that she discovered the story of Rose de Freycinet, as she walked on a remote beach at Shark Bay in Western Australia. She has always had a fondness for beachcombing in distant places, for which biographical research provides a wonderful excuse.

Other Works by Suzanne Falkiner