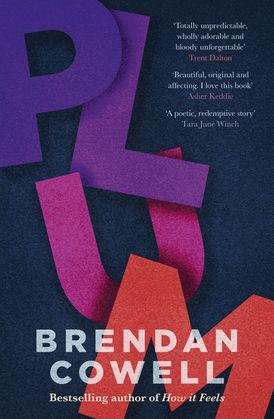 The wildly impressive, raucously funny and deeply moving second novel from award-winning writer, actor and director for television, theatre and film, Brendan Cowell, confirming the talent he showed in his bestselling debut novel from 2010, How It Feels.

Peter 'The Plum' Lum is a 49-year-old ex-star NRL player, living with his son and girlfriend in Cronulla. He's living a pretty cruisey life until one day he suffers an epileptic fit and discovers that he has a brain disorder as a result of the thousand-odd head knocks he took on the footy field in his twenty-year-career. According to his neurologist, Plum has to make some changes - right now - or it's dementia, or even death.

Reluctantly, Plum embarks on a journey of self-care and self-discovery, which is not so easy when all you've ever known is to go full tilt at everything. On top of this, he's being haunted by dead poets, and, unable to stop crying, discovers he has a special gift for the spoken word. With spectral visits from Bukowski and Plath, the friendship of local misfits, and the prospect of new love, Plum might just save his own life.

From award-winning writer, director and actor, Brendan Cowell, Plum is a powerfully moving, authentic, big-hearted, angry and joyous novel of men, their inarticulate pain and what it takes for them to save themselves - from themselves. It's got a roaring energy, a raucous humour, a heart of gold and a poetic soul.

'Exploring masculinity and the healing power of language with great humour, grace and whimsy, Plum is a bighearted, raw and joyous take on what it means to be a man in modern Australia.' Sunday Times

'The audacious inclusion of literary outlaws ... the muscular viscerality of his language ... [Plum is] a Shire pastoral that yearns for a nostalgia fantasy of The Golden Days ... I wonder whether Plath was inspired by the great Peter Lum. Or if Whitman wrote Leaves of Grass observing a spear of summer grass while sitting in Shark Park one lonely Sunday afternoon.' Sydney Morning Herald

Brendan is an award-winning writer, actor and director for television, theatre and film. He wrote the smash hit RUBEN GUTHRIE for Belvoir St Theatre in 2009, and wrote and directed the film adaptation, winning an AWGIE for the screenplay. Brendan wrote two episodes of the multi award-winning series THE SLAP for which he won the AACTA Best Screenplay prize. He has been named the 'leading light amongst playwrights of his generation' (The Sun Herald) and has won the Patrick White Playwright's Award, the Philip Parsons Young Playwright's Award and the Griffin Award. His 11 plays have been produced all around the world. He was awriter on the acclaimed TV series LOVE MY WAY, in which he starred. Many of his episodes for LOVE MY WAY were nominated for Australian Writers Guild Awards (AWGIE) for Outstanding Screenplay. Brendan is based between New Zealand, Sydney and London, and yet remains a loyal Cronulla Sharks fan. Brendan's bestselling debut novel How It Feels was published by Pan Macmillan in 2010.

Other Works by Brendan Cowell