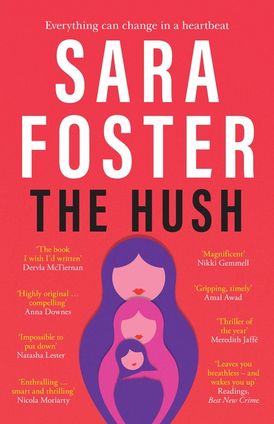 Everything can change in a heartbeat ... The pulse-pounding new thriller from the bestselling author of You Don't Know Me

Lainey's friend Ellis is missing. And she's not the only one.

It's been six months since the first case of a sudden epidemic - when a healthy baby wouldn't take a breath at birth - and the country has been thrown into turmoil. The government has passed sweeping new laws to monitor all citizens. And several young pregnant women have vanished without trace.

As a midwife, Lainey's mum Emma is determined to be there for those who need her. But when seventeen-year-old Lainey finds herself in trouble, this dangerous new world becomes very real. The one person who might help is Emma's estranged mother, but reaching out to her will put them all in jeopardy ...

The Hush is a new breed of thriller, an unflinching look at a society close to tipping point and a story for our times, highlighting the power of female friendship through a dynamic group of women determined to triumph against the odds.

'Smart and considered, this is the book I wish I had written. Sara Foster is one of my favourite writers.' Dervla McTiernan

'Brilliantly imagined and superbly told, this story reaches out and grabs you right from the outset. It's impossible to put down, not just because of the gripping plot but because the three women at the centre of the book wind themselves around your heart as they struggle to comprehend the increasingly frightening world they're living in. This is the novel everyone will be talking about this year.' Natasha Lester

'Right from the first page, Foster had me gripped. The Hush will be the thriller of the year' Meredith Jaffe

'Highly original and thought-provoking, The Hush is a compelling page-turner' Anna Downes

'A gripping, timely and relevant exploration of womanhood ... A futuristic cautionary tale that is both frightening and familiar' Amal Awad

'Equal parts terrifying and enthralling, The Hush presents a frighteningly plausible future in this smart and thrilling novel with strong, likeable female leads and captivating twists and turns. I could not put it down and I could not stop talking about it.' Nicola Moriarty

'The kind of book to leave you breathless - and wake you wide up.' Readings, Best Crime Books to Look Out For

'Strong and thought-provoking ...Verdict: Could not look away.' Karina Kilmore, Herald Sun

'Gripping and chilling all at once' Australian Women's Weekly

Sara Foster is the bestselling author of six psychological suspense novels: You Don't Know Me, The Hidden Hours, All That is Lost Between Us, Shallow Breath, Beneath the Shadows and Come Back to Me. Her seventh novel, The Hush, will be published by HarperCollins (Australia) and Blackstone (US) in November 2021. Sara lives in Western Australia with her husband and two young daughters, and is a doctoral candidate at Curtin University. Find out more at www.sarafoster.com.au

Other Works by Sara Foster