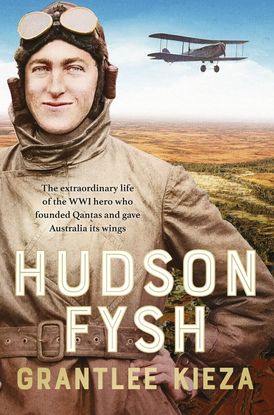 By the critically acclaimed author of bestselling biographies of John Monash, Banjo Paterson, Joseph Banks, Lachlan Macquarie and Henry Lawson, this is a fascinating, lively and thoroughly researched portrait of a modest, resolute family man with a steady hand during turbulence, a man who guided Australia's national airline from its humble beginnings through the dark days of the Great Depression, the perilous years of World War II, when the airline flew dangerous missions for the Allies, and into the great boom in international tourism that followed with the jet age.

Hudson Fysh was a decorated World War I hero who not only founded Australia's national airline, Qantas, but steered it for almost half a century from its humble beginnings with two rickety biplanes to the age of the jumbo jets. More than anyone, Fysh shaped the way that Australians saw the world.

A sickly boy traumatised by his parents' broken marriage, Fysh was a poor student, but the courage and determination he developed playing sport propelled him through his toughest challenges and became the foundations of this great Australian life.

One of Australia's celebrated Light Horsemen at Gallipoli, Fysh went on to fly death-defying missions for Lawrence of Arabia with the Australian Flying Corps and battle Germans in deadly dogfights in the skies over Palestine. On his return from the Great War, Fysh launched his bush airline, the Queensland and Northern Territory Aerial Services Ltd (Qantas), with the help of a wartime pilot friend and some western Queensland graziers. After flying the first scheduled Qantas passenger flight in 1922, he ushered in the Flying Doctor Service that still assists remote communities and the first Qantas international airmail services, which revolutionised Australian communications. Fysh went on to guide Qantas through the dark days of the Great Depression, the perilous years of World War II, when the airline flew dangerous missions for the Allies, and into the great boom in international tourism that followed with the jet age, giving millions of Australians their first experience of international travel.

Award-winning journalist Grantlee Kieza OAM held senior editorial positions at The Daily Telegraph, The Sunday Telegraph and The Courier-Mail for many years and was awarded the Medal of the Order of Australia for his writing. He is a Walkley Award finalist and the author of twenty acclaimed books, including bestsellers The Kelly Hunters, Lawson, Banks, Macquarie, Banjo, Mrs Kelly, Monash, Sons of the Southern Cross and Bert Hinkler.