The Ferals that Ate Australia

From the bestselling author of The Dogs that Made Australia 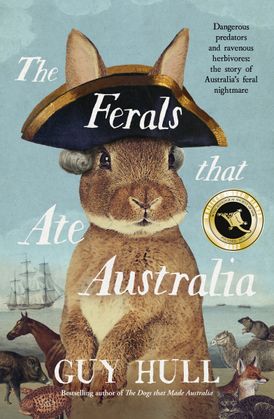 The Ferals that Ate Australia

From the bestselling author of The Dogs that Made Australia

Isolation was once the impenetrable barrier that protected Australia and its unique fauna. But a little over two hundred years ago a foreign power took possession and brought with it the foreign animals that now dominate the country's ecosystem. They are the enemy within.

Since that time, around 10 per cent of Australia's endemic terrestrial mammalian species have become extinct. Today Australia is dealing with the damage caused by all hard-hoofed animals, domestic and feral.

Yet the bigger feral story is the ravages of acclimatisation, as new settlers tried to make the colony more like their homeland and released the rabbit, the fox, the hare, feral cats, common mynahs, starlings, sparrows, redfin perch, and the many other invasive species that have brought natural Australia to its knees.

In this book, Guy Hull details the history and toll of the 45-odd foreign animal species that have contributed to the decimation of Australian species, their assault on land and agriculture, and the modern strategies that are - hopefully - reclaiming the country for our native fauna and all Australians.

Guy Hull is the author of the bestselling The Dogs that Made Australia. He is a qualified and experienced dog behaviourist and trainer, possessed of an encyclopaedic knowledge of dog breeds, crossbreeds and types. He also has a passion for Australia's natural, human and canine history, and our relationship with the dogs, livestock and other introduced animals that have influenced the evolution of modern Australia.

Other Works by Guy Hull

The Dogs that Made Australia: The Story of the Dogs that Brought about Australia's Transformation from Starving Colony to Pastoral Powerhouse

The Dogs that Made Australia