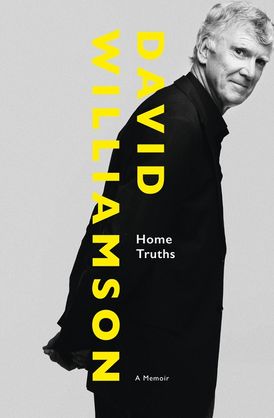 The revealing and candid memoir of Australia's legendary playwright and screenwriter

The definitive memoir of David Williamson, author of iconic dramas such as The Removalists, The Club, Don's Party, Emerald City and Travelling North , as well as more than fifty other plays, explores the life of the writer and the true stories and real lives that inspired his works. A powerful force in theatre since the 1970s, Williamson's plays have uniquely explored the pulse of our Australianness.

After five decades of chronicling the blunders, mishaps and messes that he and his fellow Australians got themselves into, Williamson has penned his long-awaited memoir, Home Truths. It reveals the story of the man behind the work: how a childhood defined by marital discord sparked a lifelong fascination with the power of drama to explore emotional conflict; how a mechanical engineering student became our most successful playwright; the anxiety that plagued him as he crafted his plays; the joy of connecting with an audience and the enduring sting of the critics; and the great love story that defined his personal life.

Fearless, candid and witty, Williamson also writes about the plethora of odd, interesting, caustic and brilliant people - actors, directors, writers, theatre critics, politicians - who have intersected with his life and work: from a young Jacki Weaver and Chris Haywood in the first Sydney production of The Removalists in 1971, to Nicole Kidman on the brink of stardom in the 1988 feature film of Emerald City, and lively dinners with political powerhouse Paul Keating; and from Graham Kennedy in the 1976 film version of Don's Party through eventful overseas travels with Gareth Evans, Peter Carey, and Tim Winton to a West End production of Up for Grabs starring Madonna, and the satisfaction of seeing his sons, Felix and Rory, tread the boards in several of his own plays.

"Williamson always keeps us engaged ... his words weave a spellbinding course. ....testament to the power of Williamson's language." Daily Telegraph

"His genius has been to define for us, in advance of our own recognition, the qualities which make up the Australian character" Katharine Brisbane, The Australian

David Williamson is one of Australia's best known and most widely performed playwrights and one of Australia's leading screenwriters. His dramas have been produced by all the major Australian theatre companies and have been translated into many languages and performed internationally. David has directed eight professional productions of his own work and written many radio dramas. He has also written (or co-written) scripts for fifteen feature films, including the original screenplays for Petersen, Eliza Fraser (starring Susannah York), Gallipoli and The Year of Living Dangerously (both starring Mel Gibson), Phar Lap and Balibo (with Robert Connolly). His movie adaptations of his own plays include The Removalists, Don's Party, The Club, Travelling North, Emerald City and Sanctuary, and for television he adapted On the Beach, A Dangerous Life, The Perfectionist and The Department and wrote The Four Minute Mile.

David was the first person outside Britain to receive the George Devine Award for an original play (for The Removalists). His many other awards include twelve Australian Writers' Guild AWGIE Awards, five Australian Film Institute Awards for Best Screenplay and, in 1996, The United Nations Association of Australia Media Peace Award. In 2005 he was given the Richard Lane Award for services to the Australian Writers' Guild. David has also received four honorary doctorates and been made an Officer of the Order of Australia, and been named one of Australia's National Living Treasures.

Other Works by David Williamson