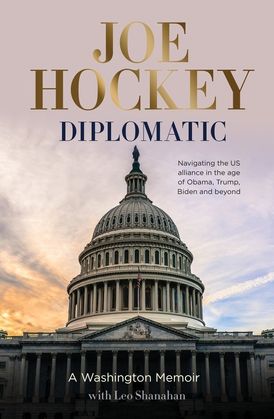 In September 2015, Joe Hockey's promising political career was brought to a dramatic end when Malcolm Turnbull successfully challenged Prime Minister Tony Abbott for the Liberal Leadership. After felling the Abbott/Hockey Government, Turnbull informed Hockey that he would no longer be treasurer of Australia - a deal had been struck with Scott Morrison. Instead, Turnbull offered Hockey a new role: Australia's Ambassador to the United States.

Traversing the worlds of politics, business and diplomacy, Joe Hockey's Diplomatic is an insightful, honest and at times hilarious insider's memoir recounting the former treasurer's unique diplomatic style. It chronicles the evolution, depth and complexity of the US-Australian relationship, from the final year of the Obama administration, the triumph and chaos of the Trump presidency and then on to the two nations' shared future under President Joe Biden and beyond.

Based in Washington DC, Ambassador Hockey immediately found himself in the middle of the historic 2016 presidential campaign between Hillary Clinton and Donald Trump. Despite strong objections from his own government, Hockey reached out to the Trump campaign early on. Betting on the electoral appeal of the brash, anti-establishment candidate, Hockey secured priceless early diplomatic contacts within the Trump campaign and then his administration.

Anchored by Hockey's direct interaction with Trump's dysfunctional White House, Diplomatic reveals for the first time the aftermath of the leaked phone call between the US president and Prime Minister Turnbull. Hockey recalls his personal dealings with Trump on the golf course and the cavalcade of characters who came in and out of Trump's Oval Office, including Steve Bannon, Stephen Miller and Mick Mulvaney.

Donald Trump's unconventional presidency turned politics and diplomatic relations in Washington DC on its head. When Joe Hockey found himself an unlikely diplomat in this new world order, his unorthodox dealmaking instincts placed him in the hot seat at precisely the right moment in history.

Joe Hockey served as Australia's Ambassador to the United States of America in Washington from January 2016 to December 2019. Mr. Hockey was responsible for Australia's relationship with the US during the final year of President Obama's tenure and the first three years of President Trump's term. Mr Hockey is Founding Partner and President of Bondi Partners and is based between Sydney and Washington DC. At Bondi Partners, Mr. Hockey spearheads the firm's strategic direction in both the United States and Australia.

As Treasurer of Australia, Mr. Hockey was responsible for all aspects of the Australian economy. With a reputation as a reformer, Mr. Hockey helped shape the modern financial system in Australia and had a major hand in the formation of industry policy, from tourism and hospitality to health and welfare. In 2014, Mr. Hockey chaired the highly successful G20 Finance Ministers and Central Bank Governors meetings. He initiated major infrastructure initiatives ranging from the implementation of asset recycling financing to the creation of the G20 Infrastructure Hub. He first entered Parliament in 1996 as the Member for North Sydney and spent more than seventeen years on the front bench. Over the course of his parliamentary career, Mr. Hockey served as a Minister in a number of different portfolios including Financial Services, Small Business and Tourism, Human Services and Employment and Workplace Relations.

Mr. Hockey has served as a banking and finance lawyer with a major Australian law firm. He graduated from the University of Sydney with Bachelor degrees in Arts and Law. Mr. Hockey is married to Ms. Melissa Babbage, a company director and former investment banker. They have three young children Xavier, Adelaide and Ignatius

Other Works by Joe Hockey