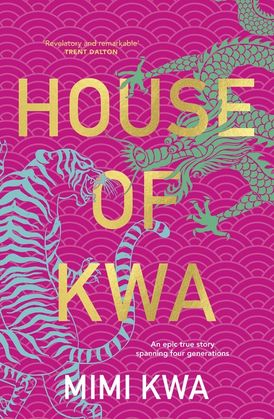 The dreamer boy travelling on dragon hide ... a tiger running alone in the night ...

Mimi Kwa ignored the letter for days. When she finally opened it, the news was so shocking her hair turned grey. Why would a father sue his own daughter?

The collision was over the estate of Mimi's beloved Aunt Theresa, but its seed had been sown long ago. In an attempt to understand how it had come to this, Mimi unspools her rich family history in House of Kwa.

One of a wealthy silk merchant's 32 children, Mimi's father, Francis, was just a little boy when the Kwa family became caught up in the brutal and devastating Japanese occupation of Hong Kong during World War II. Years later, he was sent to study in Australia by his now independent and successful older sister Theresa. There he met and married Mimi's mother, a nineteen-year-old with an undiagnosed, chronic mental illness. Soon after, 'tiger' Mimi arrived, and her struggle with the past ? and the dragon ? began ...

Riveting, colourful and often darkly humorous, House of Kwa is an epic family drama spanning four generations, and an unforgettable story about how one woman finds the courage to stand up for her freedom and independence, squaring off against the ghosts of the past and finally putting them to rest. Throughout, her inspiration is Francis's late older sister, the jet-setting, free-spirited Aunt Theresa, whose extraordinary life is a beacon of hope in the darkness.

Mimi Kwa has been a journalist and television newsreader for twenty years as well as appearing in TV series and commercials. She and her partner, John, live in Melbourne, with their four children, a cavoodle and a burmese cat. Mimi loves to paint and write. This is her first book.

Other Works by Mimi Kwa