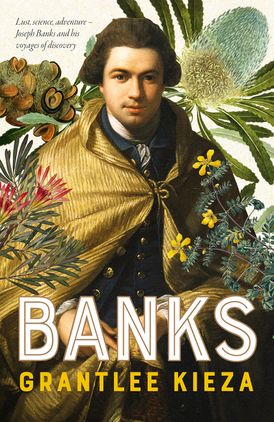 Lust, science, adventure -- Joseph Banks and his voyages of discovery

Explorer, naturalist and president of Britain's Royal Society, Sir Joseph Banks was a larger-than-life character best known for his promotion of science. In 1768 Banks joined Captain James Cook's expedition to the South Pacific. The 30,000 specimens he brought back generated enormous interest, as did the sometimes racy written account of the journey, which chronicled his frequent amorous exploits.

Banks' passion for the new and unusual flora of Australia led him to recommend Botany Bay to parliament as an excellent place for a penal settlement, despite the fact the soil was poor and there was no fresh running water, but he later became the foremost expert on everything Australian.

By award-winning bestselling writer Grantlee Kieza, Banks is a rich and rollicking biography of one of Britain's most colourful and successful scientists.

Award-winning journalist Grantlee Kieza has held senior editorial positions at The Daily Telegraph, The Sunday Telegraph and The Courier-Mail. He is a Walkley Award finalist and the author of thirteen acclaimed books, including the recent bestsellers Macquarie, Banjo, Mrs Kelly, Monash, Sons of the Southern Cross and Bert Hinkler.