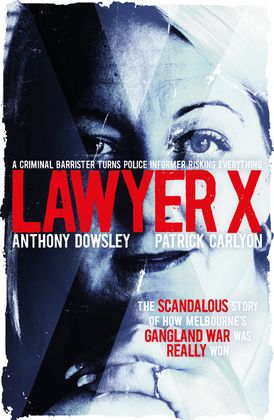 Melbourne's gangland war was an era dominated by murders, stings, hits, drug busts, corruption and greed - inspiring bestselling books and even a popular TV series, Underbelly. It took the police a decade to curtail the violence and bring down criminal kingpins Carl Williams, Tony Mokbel and their accomplices. When the police finally closed the case file, just how they really won the war, with the help of an unlikely police informer, would become a closely guarded secret and its exposure, the biggest legal scandal of our time.

Lawyer X is the scandalous, true story of how a promising defence barrister from a privileged background broke all the rules - becoming both police informer and her client's lover - sharing their secrets and shaping the gangland war that led to sensational arrests and convictions. The story of how Nicola Gobbo became Lawyer X, and why, is a compelling study in desperation and determination.

Lawyer X is the definitive story of Melbourne's gangland wars and its most glamorous and compelling central character, based on the ground-breaking work of investigative journalists Anthony Dowsley and Patrick Carlyon, who broke the story for the Herald Sun in 2014, and their five-year struggle to reveal the truth about the identity of Lawyer X.

Patrick Carlyon has been a senior features writer at the Herald Sun for a decade. He has won two Walkley Awards for feature writing: one for his coverage of the Black Saturday fires, the other for his account of a war medic in Afghanistan. He and Anthony Dowsley shared the Gold Quill award, among other awards, from the Melbourne Press Club in 2018 for their investigation into Nicola Gobbo.

Anthony Dowsley has been a crime reporter with the Herald Sun since 2004. He has covered unsolved homicides, law and order issues and police corruption. He broke the Lawyer X story in 2014, despite court action by Victoria Police. He is recognised as the driving force for subsequent Lawyer X inquiries, culminating in the royal commission into police informants, which began in 2019. He was recognised for both these investigations with the Graham Perkin Australian Journalist of the Year Award in 2019.

Other Works by Anthony Dowsley