From Cairo to Canberra - the irresistible story of an irrepressible woman 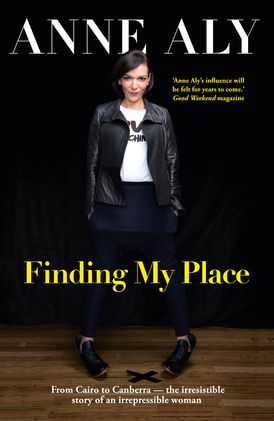 From Cairo to Canberra - the irresistible story of an irrepressible woman

From Cairo to Canberra -- the irresistible story of an irrepressible woman

'Anne Aly's ... influence will be felt for years to come ... It sinks in how significant she may be to public life.' -- The Good Weekend

In 2016, Anne Aly was the first Australian Muslim woman, the first Egyptian-born woman and the first counter-terrorism expert to be elected to federal parliament. She was also most probably the first parliamentarian to have seen Zoolander 23 times.

'What am I doing here?' she asked herself as she was sworn in with her hand on her English translation of the Quran.

It's a question the former professor has raised more than once since she arrived in Australia aged two bearing the name Azza Mahmoud Fawzi Hosseini Ali el Serougi. The answer is a fascinating and moving story of a Muslim girl growing up in suburban Australia in the seventies, a girl who danced the divide between the expectations and values of their parents' culture and that of their adopted land, and whose yardstick for 'a normal' Australian family was The Brady Bunch.

Told with warmth, humour and insight, Finding My Place is an irresistible story by an irrepressible Australian woman who has truly found where she belongs, and who continues to make her mark internationally and in public life.

Federal parliamentarian Dr Anne Aly was born in Alexandria in Egypt in 1967 and migrated to Australia at the age of two. Formerly a professor at Edith Cowan University, Anne is an internationally renowned expert in counter-terrorism and counter-radicalisation, and was the only Australian to be invited to President Obama's White House conference on violent extremism in 2015. As a single working mother of two young boys she worked for years on the minimum wage to send her two boys to school and put food on the table. She is the Founding Chair of a youth-oriented not-for-profit organisation that harnesses youth entrepreneurship and innovation to address global issues at the local level.

Other Works by Anne Aly