An Irresistible Force - How Caroline Chisholm Helped Shape a Nation 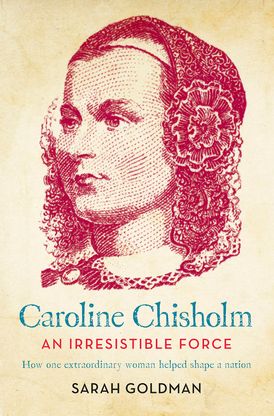 An Irresistible Force - How Caroline Chisholm Helped Shape a Nation

A fresh, spirited and engaging biography of a fascinating and influential woman who was absolutely instrumental in shaping modern Australia - but whose influence and importance has largely been forgotten.

Caroline Chisholm was a take-no-prisoners game-changer of colonial Australia - as well as a charming, wholly committed, and utterly determined force of nature. Arriving in Australia in 1838, she was appalled by the plight of young female immigrants in Australia - there were no jobs for them, no accommodation, and many of them resorted to prostitution to survive. In response to this need, Caroline became a woman on a mission. She met every immigrant ship and became a familiar figure on the wharves, finding positions for immigrant girls and sheltering many of them in her home. As the government of the day refused to help, Chisholm established accommodation, services and the first employment office in the colony, drawing up the first ever employment contracts in Australia. She established minimum wages, found jobs and homes, created employment agencies in a dozen rural centres as well, and she managed to do all this without any assistance from the government of the time. In many ways a proto-feminist and committed social activist, she utterly transformed life in Australia.

A long overdue, contemporary and lively reassessment of Caroline, which brings to life her spirited character, her modern relevance, her feminist credentials and her egalitarian spirit.

'Sarah Goldman's biography of 19th-century humanitarian Caroline Chisholm vividly conveys­ the flesh-and-blood reality of someone long stereotyped as 'rotund and frumpy' and too virtuous to be interesting. It is full of surprises about her character and her work ... Perhaps the most striking success of the book is Goldman's picture of Caroline the woman, one that will resonate with many female­ readers. Goldman delivers a refreshing, three-dimensional portrait of a great campaigner, who thought strategically, used the media like a professional, and who was very persuasive personally. It leaves the reader in no doubt that Chisholm was indeed 'an irresistible force'.' The Australian

'A lively and interesting look at one of history's great women.' Daily Telegraph

Sarah has spent most of her life as a journalist. Initially working for newspapers in Sydney and London, she later transferred to television with the BBC.  Back in Australia, Sarah continued as a producer for both commercial and ABC television news in Sydney and Melbourne. Much of Sarah's journalistic work has involved international news. Caroline Chisholm: An Irresistible Force is Sarah's first book. She and her partner, Steven have two sons and a dog. They live in Sydney.

Other Works by Sarah Goldman