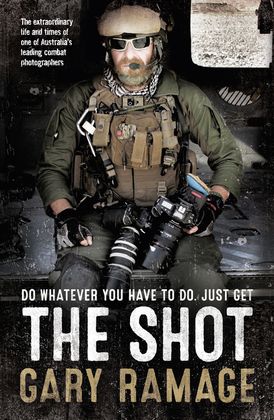 The heart-stoppingly adrenalin-charged - and often dangerous - life and times of Australian war photographer, Gary Ramage.  He goes where the troops go - but with a camera, not a gun.

As Australia's premier war photographer - and as a former soldier - Gary Ramage has been in and out of just about every conflict zone that Australia has ever been involved in. He's been embedded with troops, lived, eaten and slept alongside them.  Through good times and bad times, through rocket attacks, firefights and funerals, from photographing mass graves in Kosovo to being in East Timor when SAS troops were ambushed, from sleeping under the stars on patrol with Aussie soldiers in Afghanistan to helping out with CPR on a wounded soldier on a medivac chopper, he's been there and documented it.

It takes special grit to be a war photographer - it's an extreme and dangerous job. At least 25 journalists / photojournalists have been killed in Afghanistan alone since 2001. Journalists, cameramen, photographers - they've all been captured, tortured and executed. Risk comes with the territory.

This is a high adrenalin, sometimes moving, sometimes laugh-out-loud funny, entirely gripping story of a man who's living an extraordinary life, documenting some of the most confronting and moving moments in international conflicts and our recent history.  Here is the story behind the pictures.

GARY RAMAGE is a triple Walkley Award-winning photographer and video journalist. In 2015 Gary was awarded the Walkley Award for Press Photographer of the Year. Gary is one of Australia's leading news and documentary photojournalists, with more than 24 years experience in the industry and is currently the Chief Photographer for News Corp, covering Australian federal politics as well as national and international news stories of significant importance.

Before becoming a photojournalist, Gary spent 20 years as a military photographer, eventually serving as the Australian Army's Chief Photographer. Gary has documented conflicts all over the world, including Somalia, Bougainville, Bosnia, Kosovo, East Timor, Iraq and Afghanistan. He's also travelled extensively around the world on news assignments.

Other Works by Gary Ramage