The Promise of Science - A Vision of Hope 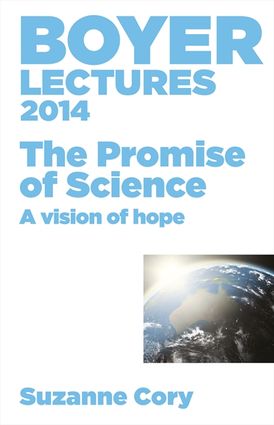 The Promise of Science - A Vision of Hope

Professor Cory is not just a scientist: she is a humanist, an environmentalist, and an unremitting optimist. Cory's Boyer Lecture series reflects her hope for a bright future.


In the Promise of Science: A vision of hope, Professor Cory explores what Australian science has given the nation and the world, and how it might help set to rights some of our biggest problems. Climate change, continuing gender inequity, the possibilities for a sustainable knowledge-based economy and the promise of medical research all come under the microscope as Cory carries an urgent message to Australians.

the Boyer Lectures is a series of talks by prominent Australians chosen by the ABC board to present ideas on major social, scientific or cultural issues. the lectures have been broadcast on ABC Radio for more than 40 years and have stimulated thought, discussion and debate in Australia on an astonishing range of subjects - great minds examining issues and values.

the Boyer Lectures began in 1959 and are named after the late Sir Richard Boyer, who was chairman of the ABC. Previous Boyer lecturers include Quentin Bryce, Marcia Langton, Geraldine Brooks, Rupert Murdoch, and Peter Cosgrove.

Professor Cory is one of Australia's most distinguished molecular biologists. She was Director of The Walter and Eliza Hall Institute and Professor of Medical Biology of the University of Melbourne from 1996 to 2009 and President of the Australian Academy of Science from 2010 to 2014. She is currently an Honorary Distinguished Professorial Fellow in the Molecular Genetics of Cancer Division at the Walter and Eliza Hall Institute of Medical Research and a Vice-Chancellor's Fellow of the University of Melbourne.

Other Works by Suzanne Cory

The Language of Houses

The End Of Absence

The Dancing Girls of Lahore