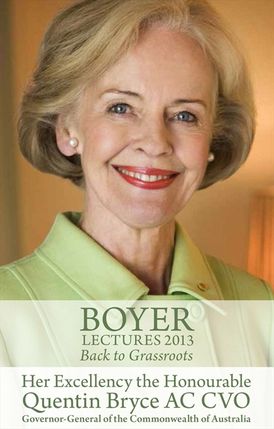 Her Excellency, The Honourable Quentin Bryce AC CVO, Governor-General of the Commonwealth of Australia, shares her thoughts on contemporary Australia.
Her Excellency's lecture series, 'Back to Grassroots', will comprise four 30 minute lectures titled: Joining the neighbourhood: a personal story of equal rights advocacy; Watching the women: the powerful role of Australian women; Australians at their best: courage, compassion and resilience in everyday life; and Advance Australia Fair: looking to the future of Australian citizenship. "I am delighted to be giving the 2013 Boyer Lectures, contributing to a national conversation that has been hosted by the ABC for more than half a century now," said Her Excellency. "Like the best sort of conversation it has taken Australians down countless paths-enthralling, challenging, unworn paths. My hope is to open up yet another pathway: one that speaks to the importance of human rights in building neighbourhood, community and citizenship.""It is an honour to have the Governor-General present this year's Boyer Lecture series. Her distinguished and multifaceted career as an academic, lawyer, community and human rights advocate and vice-regal representative in Australia will provide for diverse and insightful content, and I am sure I can speak for all Australians in saying that we very much look forward to her sharing her thoughts on contemporary Australia."Each year the ABC invites a prominent Australian to present the result of his or her work and thinking on major social, scientific or cultural issues in a series of radio talks in November known as the Boyer Lectures.the annual Boyer Lecture series began in 1959 and is named after the late Sir Richard Boyer, a former Chairman of the ABC. Over the years featured speakers have come from a very broad range of disciplines and interests. Previous Boyer Lecturers include former Reserve Bank Governor Ian Macfarlane, Archbishop Dr Peter Jensen, international affairs expert Owen Harries, historian Professor Geoffrey Blainey, author David Malouf, former Prime Minister (then head of the ACtU) Bob Hawke, Aboriginal leader and lawyer Noel Pearson, Professor Graeme Clark AC, prominent business leader Rupert Murdoch AC, General Peter Cosgrove, AC MC (Retd), Professor Glyn Davis AC, Pulitzer-prize winning author and journalist Geraldine Brooks, and Professor Marcia Langton, Professor of Australian Indigenous Studies at the University of Melbourne.

Her Excellency, The Honourable Quentin Bryce AC CVO, Governor-General of the Commonwealth of Australia, was sworn in as Australia’s 25th Governor-General on 5 September 2008. Her illustrious career includes roles such as Director of the Human Rights and Equal Opportunity Commission Queensland (1987-1988); Federal Sex Discrimination Commissioner (1988-1993); founding Chair and CEO, National Childcare Accreditation Council (1993-1996); Principal and CEO of The Women's College.

Other Works by Quentin Bryce