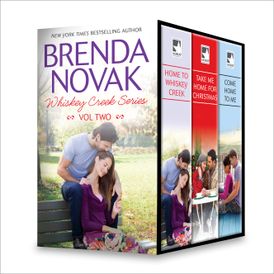 When Adelaide Davies has returned to Whiskey Creek to take care of her aging grandmother, sheisn't happy to be back—there are too many people here who wereinvolved in that terrible June night fifteen years ago, people she'drather avoid. But popular and successful Noah Rackham is shocked whenAdelaide won't have anything to do with him. He has no idea that hisvery presence reminds her of something she'd rather forget. He onlyknows that he's finally met a woman he could love.

TAKE ME HOME FOR CHRISTMAS

Everyone in Whiskey Creek remembers Sophia DeBussi as the town's Mean Girl. Especially Ted Dixon, whose love sheonce scorned. But Sophia has paid the price—the man she did marry wasrich and powerful but abusive. When he goes missing, she learns thathe died running from an FBI probe of his investment firm, leaving herpenniless and forced to face all the townspeople he cheated. Desperatefor work, she accepts a job as housekeeper for Ted, now a successfulwriter. He refuses to get emotionally involved, but will the holidaysbring them another chance at happiness?

COME HOME TO ME

When Presley Christensen returns to Whiskey Creek withher little boy, she has completely changed her life. Now she's back inthe small town that was the closest thing to “home” she ever knew.There's just one catch. Aaron Amos still lives in Whiskey Creek, andno matter how hard she's tried, Presley hasn't been able to get overhim. She's come too far to backslide now. And there's a secret she'sbeen guarding—a secret she'll do anything to protect.