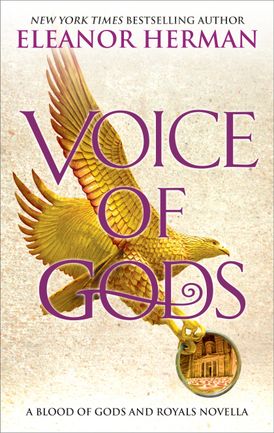 "Readers who love myth and magic will devour it!"

Fantasy, magic, royalty and danger swirl together in Voice of Gods, the ebook prequel to Legacy of Kings by New York Times bestselling author Eleanor Herman!

As the end of an age approaches, gods whisper horrors, families scheme for power and one woman may hold the secret to a lost legacy.

At nineteen, Ada of Caria yearns to take the Snake Blood throne from her mad older siblings. She seeks the help of a young orphaned girl named Helen, the first True Oracle to have walked the earth in more than three hundred years.

Helen may be able to channel the voice of the gods, but she hates her gift and will do anything to get rid of it—even lie to her best friend, Myrtale, the priestess-princess of Epirus who is destined to marry King Philip II of Macedon even though she loves another.

And in the shadows lurks a handsome green-eyed stranger who has more at stake—and more to lose—than anyone could possibly imagine.

Amid jealousy and heartbreak, torrid affairs and secret rendezvous, it is spoken by the gods that either Helen or Myrtale—newly named Olympias—will carry the destiny of the known world within her womb.

The prequel to Legacy of Kings, Voice of Gods traces the intricate web of love and betrayal that led up to the birth of history's most powerful leader, Alexander the Great.

"Legacy of Kings is fantasy just the way I like it: A mingling of history, intrigue, romance, murder, and magic." -Cinda Williams Chima, New York Times bestselling author of The Seven Realms series

"An engrossing combination of fantasy and history-readers who love myth and magic will devour it!" -Alex Flinn, #1 New York Times bestselling author of Beastly and Mirrored, on Legacy of Kings

"Action and fantasy lovers will gobble it up." -School Library Journal on Legacy of Kings

"Thoroughly researched and absolutely modern." -Kirkus on Legacy of Kings

"A richly detailed world full of romance, magic, and intrigue. Eleanor Herman blends the historical and fantastical seamlessly in this thrilling YA debut." -Amy Ewing, author of The Jewel, on Legacy of Kings

"A terrific reimagining of one of history's greatest tales. Alexander and his companions and rivals are brought to life in vibrant detail. This is a rich world full of peril and plots and world-shaking adventure."-Arwen Elys Dayton, author of Seeker, on Legacy of Kings