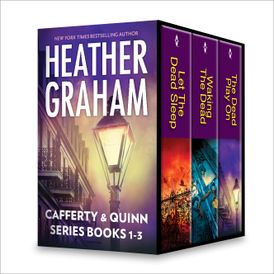 Enjoy all three books in the Cafferty & Quinn series by New York Times bestselling author and master of romantic suspense Heather Graham!LET THE DEAD SLEEPAn object of desire? Or of fear? It was stolen from a New Orleans grave—the centuries-old bust of an evil man, a demonic man. One day its current owner shows up at Danni Cafferty's antiques shop on Royal Street, but before Danni can buy the statue, it disappears… Michael Quinn, former cop and now private investigator, is determined to find and destroy this object with its long history of evil. But Cafferty and Quinn know that their story won't end, even when this case is closed and the dead rest in peace once again.WAKING THE DEADThey say a painting can have a life of its own. In the case of Ghosts in the Mind, painted by Henry Sebastian Hubert, that's more than just an expression. The characters are reputed to come to life—and to kill. Wherever it goes, death seems to follow. Danielle Cafferty and Michael Quinn, occasional partners in solving crime, are drawn into the case. They have to discover what brings this work of art—and evil—to life. And they have to destroy it. Before it destroys them…THE DEAD PLAY ONPlay a song for me… Musicians are being murdered in New Orleans, but Arnie Watson apparently died by his own hand. When Tyler Anderson plays the saxophone he inherited from Arnie, he believes he sees visions of his friend's life—and death. He becomes convinced Arnie was murdered and that the instrument had something to do with it, and with whatever's happening all over the city… Tyler knows his theory sounds crazy, so he approaches Danni Cafferty, hoping she and Michael Quinn will find out what the cops couldn't.